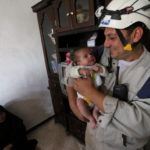 SAMS was proud to join The Syria Campaign for events in New York and DC with two members of Syria’s civil defense, Raed and Khalid. These events highlighted the amazing work of civilians on the ground.

Over 50 bombs and mortars fall on neighborhoods in Syria each day. Barrel bombs are improvised explosive devices (IEDs) that are filled with various explosives, shrapnel, and debris and often dropped from high altitudes. These devices have little to no accuracy and therefore indiscriminately target innocent civilians with devastating results.

The “White Helmets”, or Syrian civil defense, are organized volunteers who act as rescue workers in cities like Aleppo and Idlib, running to areas that have been bombed saving people in the rubble. In the last six months, they have saved more than 2500 lives, and this number continues to grow.

Until last month, almost all official members of the White Helmets, Syria’s civil defenders, were men. But now, two women’s teams have been established – and many more volunteers want to join them. The women of the White Helmets are trained and ready to save lives, but are currently seeking funding for six ambulances necessary to respond to attacks. Help support these inspiring women through their fundraising website.

We’re proud to stand by you in the fight

to save Syrian lives!

For more information on the the heroic civil defenders, visit the White Helmets website.