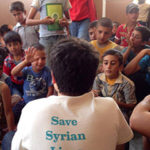 The Save Syrian Lives campaign was  launched in February 2012. This SAMS program encompasses medical relief activities directed to help Syrian patients, healthcare workers, administrators and hospitals, helping those dealing with the multifaceted ramifications of the Syrian crisis. This programming has actively sought to provide life-saving measures to all affected areas in Syria, even those considered hard-to-reach.

This campaign began as a medical mission of volunteer physicians who traveled to refugee camps in Turkey. However, since its outset, Save Syrian Lives has developed into a sophisticated yet focused medical relief operation, encompassing five countries, millions of dollars, and hundreds of employees and volunteers.

The Save Syrian Lives Campaign supports the treatment of patients injured or maimed directly by the violence, bombing, shelling, sniper attacks and chemical weapon attacks.

SAMS recently received the Humanitarian Service Award from American Muslim Health Professionals (AMHP) at their ten-year celebration! We were honored to receive such wonderful recognition and look forward to continuing work in Syria in order to save lives!