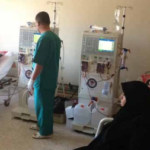 After three and a half years, the Syrian conflict has yet to be resolved. With each day passing, more people are being injured, which means more medical supplies are in demand. Unfortunately, the conflict has had staggering negative effects on access to medical supplies, specifically dialysis machines.

Dialysis is a treatment that undertakes the task of a failed kidney.  There are two types: hemodialysis and peritoneal dialysis. In hemodialysis, an artificial kidney  is used to remove waste  from a person’s blood. In order to do so, a physician must make an assertion into the blood vessels. This can be done by minor surgery.  On the other hand, in peritoneal dialysis the blood is cleaned inside a person’s body by placing a plastic tube into one’s abdomen.

According to a 2005 report funded by the EU and the Syrian Ministry of Health prior to the conflict,  Syrian doctors only had 15% of necessary dialysis machines, and because of the excess demand, they met only 6% of need. Since the conflict began in Syria, there are no statistics on demand , use of dialysis machines, or number of procedures in the Syrian Arab Republic. However, according to the 2014 essential drug list, the  WHO delivered  600,000 Renal dialysis consumable kits through Damascus.

Access for thousands of end stage kidney disease patients to dialysis clinics in Syria has become extremely difficult and sometimes impossible. Poor machine maintenance and diminishing numbers of specialists and technicians limit the availability of this life saving treatment even more. As a response, SAMS Nephrology purchased equipment to operate a dialysis facility which opened in June 2013 in the northern part of the country.The nephrology group consists of Syrian American nephrologists committed to alleviate the suffering of Syrian kidney and dialysis patients. The group provides direct patient care, consultation to nephrology and dialysis providers in Syria, equipment, and monetary donations.On June 1, a SAMS nephrologist successfully treated his first patient and will extend the service to 15 additional patients. Since June, additional nephrology centers have been established. SAMS volunteer nephrologists will take turn visiting the centers to provide training and monitor the implementation.Telemedicine is often used to collaborate and guide the local physicians.  The cost of treatment is about $300 per patient per month.

Overall, the WHO and SAMS are working hard to deliver Dialysis machines and provide the necessary treatments to the Syrian people in need.

By Lian Najjar and Kendrick Baker

Thank you card from one of our centers near Damascus:

“We are the Unified Medical Office in Douma City. We sincerely give thanks and gratitude to the SAMS Medical Organization for their material and medical support to Douma dialysis in Douma City from 8/2013 to 7/2014. We wish the best of luck in SAMS’s work.”