Diary of a Medical Volunteer: View from Jordan- Day 2 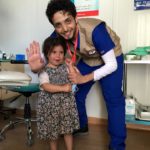 Although there were similar cases as yesterday (my first case of the day was a child of short stature), now that I had investigated and knew that we really would not be able to provide the refugees with the medicine they needed, I could deal with the situation better. I was surprised to see that people from the day before whom I sent for bloodwork actually came back with results. This was promising and made me feel like what I was doing was not futile.

I had a first year Syrian-American medical student in my office with me today who went to the same medical school as I did. Go Spartans! She helped document the number of patients we saw, took blood pressures, wrote down names/numbers of people to call back and helped when the Arabic got complicated. A few hours into seeing patients, she asked to leave for a while. She said she was still getting over the shock of her first day in the camp. I appreciated her presence for many reasons, but especially to have someone else present to remember all these patients after we leave.

We got invited as a group to dinner and all shared our stories from the day, which was a nice chance to debrief. One of the psychiatrists in the group told us how there was a boy who was born without eyebrows and got so bullied that his family had to move to a different part of the camp multiple times. She did some role playing with him to help him have some ideas of how to deal with the situation. She suggested that he could say something like ‘how intelligent you are, you figured out I have no eyebrows’ the boy replied with concern that he didn’t want to make fun of anyone. She said, no don’t make fun of them, but it’s just being clever. This same doc was impressed that she didn’t see a line of faces with flat affect, a psychological condition where depression or trauma manifests in a lack of emotional expressiveness. She wondered how these people were so resilient in the face of violence and displacement, and later attributed it to their faith.

After we finished seeing our patients, one of the French women with us wanted to buy an abaya that she saw in one of the stores as we drove in. Yes, the camp is really like a city now. They have stores to buy all kinds of things, anything that anyone would need. As we walked into one of the stores, there was a teenage girl watching a Bollywood movie. Another girl proceeded to tell us how obsessed she and everyone else in the camp was with those movies. She had favorite actresses and actors too.

The people in the camp have nothing to do and are suffering from boredom. We can’t judge them if they watch movies or go to the local sheesha bar to smoke hookah. They’re not allowed to work in Amman, and even to leave the camp they have to get a permit which takes about three days. My nurse told me about the boredom and how happy she was to have a job in the clinic. And it showed. In her enthusiasm, sense of purpose and genuine care for the patients.

We met some girls in the street who told us all about their school and the classes they were taking. That was good to know. Two of the girls I met in the 5th grade had looks of determination on their faces, and eyes that pierced the air in front of them as if they were going to knock down anyone who crossed their paths. Every time I worry about the future of the Syrian people, I will remember those eyes.