Diary of a Medical Volunteer: View from Jordan- Day 3 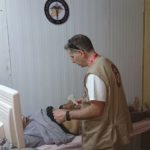 Day 3:
Today was my day to spend in a clinic is Zarqa. This clinic was started by a rheumatologist originally from Syria (Dr. S), who completed medical school abroad and then settled in Jordan. There were already a few regular doctors working there so there weren’t as many patients for me to see. But, I did spend the day watching pure, unadulterated clinical medicine at its best.

I saw some patients with each of the doctors. Dr S joked around with his patients in a way that was culturally acceptable here, but would make patients in my practice in the states either cry, go stomping out of the room or raising a stink in some other way. For example, one lady walked in and he said ‘you’re all fat! Stop eating bread and rice!’
A few children with short stature came in today too. Afterwards I picked his brain about it. I was wondering if there was a higher prevalence in people from a particular area because someone told me that there was a lot of inter-marrying. He attributed it mostly to malnutrition. People eating an overabundance of carbs compared to protein, which was not readily available. He said during World War II, the Germans had stunted growth but 10 years after the war ended their height started increasing. He also said that these days nobody has an iron level above 10 due to the lack of meat and other sources of iron. Seeing the dried up vegetables at the camp, I can see why. We examined a patient and diagnosed her with Polycystic Ovary Syndrome (PCOS) and gave her some metformin. As she was leaving he handed me some iron to give to her saying”‘She looks pale.”One girl of about age 15 came to see him and he asked her if she was enrolled in school. Unfortunately she was not because she lived in Amman and was not allowed to attend school. Dr S lamented about lost futures.
The pharmacist with us spent the day going through the meds which were a mess, expired and in disarray. She asked me if I was good at treating MI’s because she was going to have one soon, seeing as all the medications were expired. I joined her for a while going through a shelf of meds and throwing out the expired ones. When Dr S saw the box of meds being thrown out, he looked like he might need some first aid too (ba3eed as-shar)!The morning ended with the doctora (his wife) bringing us homemade yabra, koosa mahshi, tas’iyeh and other yummy Syrian food. She’s a general medicine practitioner but focuses on women’s health. I don’t know when she had time to cook all that food for us, but it was delicious.

That evening we were hosted by ‘Syrians Across Borders’, an organization started by five Syrian women dedicated to helping the injured. The first floor has about 20 beds to house men and a gym for physical therapy. The second floor has about 10 beds for women and children and the second half of the floor has rooms for education. The third floor has areas for art therapy and sewing machines where women are taught a trade so they can support themselves eventually. Hearing the stories of the injured men was heartbreaking. One man said he was a student of Arabic and was walking to university when he got hit by shrapnel that pierced through his chest and came out the other side leaving him paralyzed from the waist down. He ended his story with a smile and a genuine ‘Alhamdulillah.’ His brother was also injured in the same way and also in a wheelchair. We saw a heart-wrenching video of their reunion after not having seen each other for 6 months. There was not a dry eye in the room.

We had a chance to buy some of the beautiful, hand-made embroidered goods made by the women. Our hosts were so generous. The evening ended with a beautiful dinner of every one of my favorite Syrian foods.

Be sure to check out the moving video from Syrians Across Borders.
VIEW ALL