Diary of a Medical Volunteer: View from Jordan- Day 4 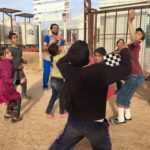 Day 4:
I just returned from another day at Zaatari refugee camp. Today was more exhausting than yesterday; one of our pediatricians fell ill last night, and we felt his absence. I walked through a crowded waiting room at 9:30am, and didn’t stop moving until 2. I lost count of the patients after 25 – I think I saw somewhere in the range of 45-50.

As visitors to the camp, we are not allowed to take pictures of people except with approval. This is for two reasons: 1) most refugees are afraid that if they are recognized in pictures, it can have dangerous consequences for their families back in Syria, and 2) out of respect for the refugees themselves.

Let me expound on this second point. Today, I began to notice trends. Children, even with the heat today in the 70’s Fahrenheit, came in with 4-5 layers of clothing. This is because the temperatures drop into the 40’s and 50’s at night, and there is no heat. Desperate attempts to heat can be fatal; last week a family of 4 burned to death in their trailer when it caught on fire from a jerry-rigged propane burner. Children also come in with opposite gender clothing; 5 year old boys with pink boots, for example. This is because the ragged, torn clothes on their backs are literally all many of them have.

The Syrian crisis is now in its fifth year and shows every sign of lasting a generation. These families in Zaatari are “lucky” – they are alive, but their existence is tenuous, their conditions subhuman, and their fortunes bleak. At one point this afternoon, I began to feel tense and uptight about the pressure to treat so many crying children at once. Then I realized just how selfish that would have seemed to the patients themselves, the vast majority of whose parents graciously thanked me, blessed my hands, and put me to shame.

I am exhausted – and glad to be here. I just wish none of us had to be.