Diary of a Medical Volunteer: View from Jordan- Day 5 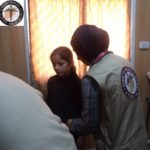 Today we got all the follow-ups that I had sent for blood work coming back for review. There were 40 patients registered to see us for the day, but I think the number was closer to 60 in the end. We went four hours without a break, but did not want to stop so that everyone could be seen. Most of the follow-ups were for thyroid problems, but today, I want to talk about Type I diabetes.

I saw the 19 year-old girl with type I diabetes that I saw the first day here. I did not see her smile once the whole time she was there. She was very thin and had other hormonal problems as well, likely as a result of her uncontrolled diabetes. Her blood sugars were still in the 300s. Her mother said she doesn’t observe a judicious diet despite being told many times.

I would like to pause here and reflect on Type I diabetes in patients, more specifically teenagers, who do not live in a refugee camp. Teens who have every luxury and state of the art medicine available to them….. and you know what? They don’t follow a judicious diet either. During my fellowship, one of my attendings used to point out that teens are already being told to refrain from so many enticing things (drugs, alcohol etc). On top of all of that, they can’t even eat what they want. Teenagers are the same everywhere.

But, not all teenagers live in refugee camps, in rooms the size of a cubicle, not knowing what or if they will have food to eat on a day to day basis. I didn’t want to lecture her. How could I tell her to stop eating which was probably one of the only pleasures in the camp? Out of any illness to have in the camp, I can’t think of a tougher one to have. So today, let’s all say a prayer for this girl, and for all people with Type I diabetes. And let’s all for a moment be thankful if we have a functioning pancreas.