Education in the Midst of War 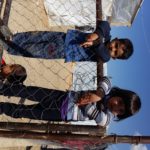 “War acquires comparatively little significance for children so long as it only threatens their lives. It becomes enormously significant the moment it breaks up family life.” – Anna Freud, 1943

All aspects of Syrian lives have been drastically changed from the escalating conflict. Syrians from every age group wake up each day with the fear of losing their lives. Along with the targeting of medical facilities and health personnel, schools are often targeted and destroyed or damaged throughout Syria, further hindering the educational development of Syrian students. Children are facing the strongest trauma of the war as they often grow in an environment full of fear, chaos, death, and a substantial lack of education. For too many, their innocence has been taken away and their main goal in life is to survive. Syrian refugees in neighboring countries and those displaced internally are increasingly deprived of the education that can serve as a gateway to a better life.

In the month of April 2015, approximately 94 vital facilities were targeted by government forces and extremist groups, 15 of which were schools. Since the conflict started more than 3,465 schools have been destroyed or damaged, over 1,000 are being used as shelters, and many more are occupied by armed forces. Syria pre-crisis had nearly 100% student enrollment rates – Syria has now dropped to having the second worst rate of school attendance in the world, with over 2.8 million children out of school. School hours within northern Syria have adjusted to the daily barrel bombings by ending sessions before 12 noon, when the helicopters usually fly overhead and drop bombs. The difficulty of concentrating within these conditions has forced many of the students to drop out. Hanan, a Syrian teacher, stated, “Right now you can ask any child about the different types of weapons and they would be able to name all of them for you; they remember weapons more than lessons.”

Various NGOs have worked consistently to help Syrian children  continue their education in neighboring refugee camps and inside Syria. The Karam Foundation’s mission is to build a better future for Syria, and by providing education in war-zones they bring hope to those facing the regional  crisis. The organization has collaborated with Taalim, a Syrian NGO on the ground to rebuild schools that have been damaged by barrel bombs.Syria Relief and Development encourages humanitarian organizations to use their local ties and knowledge to pursue education initiatives among the communities they assist.  Save the Children operates in 120 countries and through advocacy, fundraising, and donations provide emergency assistance in regions such as Syria. Mercy Corps’ inclusive education program in refugee camps in Jordan provides children with various disabilities access to public education through the support of UNICEF.  The efforts of these international and Syrian organizations, among many others, have been substantial in working to continue the education of millions of displaced Syrians inside both refugee camps and Syria itself. Although much more work is needed to prevent the Syrian children from becoming a lost generation, progress is not possible without the work and coordination of humanitarian organizations on the ground.