Fighting to Survive: Learning to Live Under Siege 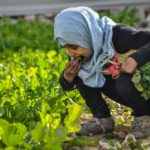 “Many of our dreams have disappeared. The only dream that remains is our dream of surviving this crisis, which has stripped us of our rights and our dignity. Our feelings are crystallized in one word: fear. We are more afraid every day,” wrote Marah, a girl living in a besieged area of Syria.

With over 640,200 people living under siege in Syria, many people have been forced to abandon their hopes and aspirations to focus on merely staying alive. The medical toll of siege, both physical and mental, is extremely harsh. However, the lack of adequate medical care is only one of the many issues facing besieged peoples. Deprived of access to the outside world and the supplies that come with that access, people living under siege are required to devise and innovate new methods of survival.

Many of the basic necessities of life, such as food and water, are difficult to come by in besieged areas. Running water is unavailable, so people turn to wells, manually pumping the water and carrying it in buckets and other improvised containers to their homes. This, though, is not always a good solution, for well water is exposed to many contaminants and often polluted by sewage.  In 2014 Syria experienced the worst drought in 50 years, causing already limited water supplies to be further depleted and crops to go without irrigation. Essential grains used to make food are also scarce, and as a result, many families such as Marah’s have to resort to using cattle feed (barley) to make bread and other basic meals. For those that are able to grow crops, their fields are frequently the target of government aerial attacks. The limited amount of food that is either allowed or smuggled in is sold at highly inflated prices, making it inaccessible to most people.

In the besieged neighborhood of Yarmouk in Damascus, for example, a group of young men have responded to the food shortage by learning how to garden. With the government allowing little to no food into the neighborhood and the black-marketeers charging exorbitant prices for what food is available, Jafra and his friends decided to begin gardening on a rooftop. Initially believed to be a crazy idea by some of the elders in Yarmouk, the urban gardens on rooftops and in abandoned lots soon became a vital source of food for the community, especially during the winter, when nourishment is otherwise hard to get.

Like running water, electricity to besieged cities is also cut off. Generators are used by those who can afford them, but they require fuel, which is also in short supply. Gas for cooking, boiling water, and heating homes in the winter is largely unavailable too, forcing people to turn to burning firewood and garbage in poorly ventilated rooms. As a result, smoke and toxic fume inhalation is common. To combat these shortages, besieged peoples have embraced alternative energy options. In Deir Assafir, Eastern Ghouta the local council established a small solar energy project. In Douma, SAMS, along with the Syrian American Engineers Association, pioneered a renewable energy project that uses methane gas from animal waste to power various civilian services. Many young people are also using bicycles to generate electricity to power their cell phones. Necessity often brings about innovation, and in the besieged areas of Syria, innovation abounds. Despite these creative solutions, ending the sieges is essential to bringing stability, sanity, and prosperity back to the lives of those under siege. “Fear,” as Marah notes regarding the effects of the crisis and siege, “has surrounded us for years, and it slowly kills everyone who lives here.”