The Medical Toll of Living Under Siege 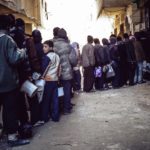 A young girl collapsed one day at school in besieged Eastern Ghouta. She had entered a coma as a result of chronic malnutrition. After helping her stabilize, a doctor told her mother that the girl needed to be fed before school each day. “I have three daughters and one can eat each day. Today was not her turn to eat,” replied the mother. The Syrian American Medical Society recently put out a report entitled Slow Death in which we reported that over 640,200 people are currently living under siege in Syria. Many of the sieges began to come into effect by the end of 2012, but only in mid-2013 did it become clear that long-term siege warfare was being systematically employed by the government and pro-government militias. People living under siege are deprived of many of the essentials of life, such as food, water, medicine, and fuel. Under the 1977 Additional Protocols to the Geneva Conventions, starvation of civilians, which is the result of most sieges, as a method of warfare is prohibited.

The healthcare situation in communities under siege is dire. With no public hospitals in besieged areas, all healthcare is provided by local medical councils and field hospitals. These facilities are understaffed, underequipped, undersupplied, and frequently the targets of government aerial strikes. The WHO recommends that there be 2.3 medical professionals (physicians, nurses, and midwives) per 1,000 people. In besieged Homs, there are only 0.125 per 1,000 people; in Eastern Ghouta, that number is 0.11. In addition to the scarcity of health workers, there is also an extreme shortage of medical supplies due to the limited humanitarian access to besieged areas. Furthermore, the government deliberately restricts access to anesthesia drugs, sutures, and blood transfusion materials as they consider it aid to the opposition. In July 2012, providing medical care to opponents of the government was deemed a criminal offense. This new law has not only hurt the flow of supplies into besieged areas but has also resulted in the arrest and killing of dozens of medical workers. Blood transfusions, which are essential in treating everything from trauma cases to complications from childbirth, are especially difficult because of the shortage of blood bags. Because of government restrictions they have to be smuggled into besieged areas, which is extremely risky, as being found in possession of blood bags can lead to on-the-spot execution. Doctors often use plastic bags as a substitute, but this leads to a higher mortality rate. As a result of the lack of medical professionals and supplies, many easily treated communicable diseases, chronic conditions, traumatic injuries, and non-communicable diseases, such as diabetes, hypertension, kidney disease, and cancer, are left untreated, ultimately leading to the unnecessary deaths of many besieged people.

The physical toll of siege is great. Because good food is often scarce, besieged peoples have to resort to food previously reserved for animals— barley and plant matter are now some of their foundational ingredients. This limited access to sufficient nourishment leads to widespread malnutrition, and dehydration is also prevalent due to the lack of running water and a weak sense of thirst caused by malnutrition. When drinking water is available, it is often contaminated with waterborne diseases such as hepatitis A, typhoid, and Salmonella.

While life under siege is physically difficult, for many the mental toll is much worse. SAMS estimates that the majority of Syrians suffer from some sort of mental affliction such as PTSD, depression, or shock. Doctors also experience severe psychological trauma. During mass casualty events, doctors have to choose who to treat, often meaning that they must turn away patients who require risky treatments to conserve supplies for those more likely to live. In situations such as these, the doctors are fully aware that they are deciding who lives and who dies. One surgeon in Aleppo said: “If an operation is likely to take more than two hours, we have to forget it and the patient dies.” Another reported: “Once beds are filled, there is nothing to be done for others.” Of all the suffering in Syria as a result of the crisis, those living under siege experience the worst of it. Ending the sieges remains a crucial aspect of resolving the humanitarian and healthcare crisis in Syria, as those in besieged areas have little access to the care that they so desperately require.