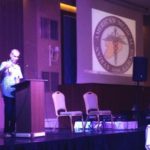 I want to talk to you about the medical work in East Ghouta. But how can I describe this epic humanitarian crisis that is happening there and in all of our beloved Syria in a few words and a few minutes.This crisis has surpassed the heroic poem of Gilgamesh, the Iliad, and the Odyssey. And if the latter was a figment of imagination, our heroic poem is beyond imagination.

I am going to limit my speech to describe your colleagues who are practicing under bombing, siege, limited resources, and extreme work conditions that seem to be without end. In order to stay away from emotions I am going to talk to you in the language of numbers in two points, because numbers don’t lie.

The first point: All the specialist physicians in Ghouta are on call continuously and without rest, vacation, or sick leave. Since East Ghouta has been a “free area but under siege” since November 1, 2012 and today is July 24, 2015. How many days have your colleagues been on call continuously in that place that seem not to belong to planet earth? I will leave the math to you but I wonder if it is possible to record that number in Guinness World Records? I also wonder if any of them took a day off, where would he or she spend it: watching the ruins of Jober, or what is left of Zamalka, or the streets closed with rubbles in Harasta, or under sniper range in the farms of Douma?

The second point: How do your colleagues spend their call?
I am going to talk in numbers about a day in Ghouta:
The date: I am going to leave it to the end.
The event: 7 air raids by Mig and Sukhoi warplanes.
The target: Civilian quarters in Douma.
The time: 2-4 pm.
The tools: 12 thermobaric bombs.
The result: 177 wounded, 62 surgeries under general anesthesia, 17 amputations, 71 deaths, and 105 blood transfusion units (whole blood).

Nine surgical teams were working continuously for more that 24 hours. They were getting fed and hydrated while working in the operating rooms. Since the population of Douma at that time was 200,000 (our of an original 550,000), how can we compare our numbers with a city like New York with a population of 18 million (90 times). Our numbers will translate to the following numbers on the scale of New York: 13,930 wounded, 5,580 surgeries under general anesthesia, 1,530 amputations, 6,390 deaths, and 9,540 blood transfusion units.

Do you remember the number of casualties on September 11, 2001 in New York and can you compare it with our scaled numbers?

Let me finish by telling you the date of this massacre committed by the Syrian government against the city of Douma. It was September 11, 2014. So on the same day that New York was commemorating the 13th anniversary of that black day in September, the Syrian people were at the receiving end of a disaster that equals 4-5 times the New York disaster. Yes, it was exactly that day. Was it a coincidence?