Healing the Invisible Wounds of War 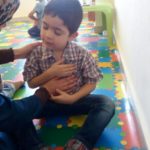 The damage of war is often obvious. Scars from shrapnel of barrel bombs provide visible evidence of the violence Syrian civilians have faced in the ongoing crisis in Syria. However, the conflict has left behind invisible scars on the millions of Syrians fleeing the conflict. The psychological toll of living in a war zone has resulted in a mental health crisis among Syrian civilians, Internally Displaced Persons (IDPs), and refugees.

In 2014, the International Medical Corps estimated that 54% of Syrians either displaced within the country or living outside its borders in Jordan, Turkey, and Lebanon suffered from severe emotional disorders such as Post-Traumatic Stress Disorder (PTSD), depression, and anxiety. Many of those suffering from mental health problems are children who still live in fear of violence and death. UNICEF found that ⅓ of the children living in the Za’atari Refugee Camp showed signs of psychological distress either through increased aggressive behavior or self-harm. Many children suffer from horrific nightmares and flashbacks due to the violence they have witnessed. A 10 year old girl named Fatima told UNICEF about a recurring nightmare about carrying a dead man. Some children have simply lost hope and show signs of withdrawal and fatigue.

The psychological distress caused by the violence of the conflict is often compounded by the stress of displacement. The struggle to obtain basic necessities such as food and shelter or the inability to find work in host countries only increases the mental health struggles for refugees. A life of displacement can cut people off from positive coping mechanisms for psychological distress, such as visiting friends, going to work, and attending school. Unfortunately, living in a refugee camp greatly restricts the ability of Syrians to engage in these healthy activities. Furthermore, traditional support networks such as family and friends get uprooted, leaving Syrians with few outlets to address their mental health needs. This is particularly difficult for children who rely on their parents or caretakers to help provide a sense of security and alleviate psychological distress. If their caregiver is suffering from mental health problems, it can make it more difficult for a child to cope with his or her own troubles. Without positive coping mechanisms many Syrians turn to destructive methods of coping such as alcohol and drug use or criminal activity.

The mental health situation can seem overwhelming, but there are people working to heal the psychological injuries of the conflict in Syria. Many organizations have started to address the mental injuries of conflict as well as the physical. Dr. Mohammad Abo-Hilal, a Syrian psychiatrist and director of Syria Bright Future, has helped Syrian children in the Za’atari camp cope with their trauma. He has used visualization and relaxation techniques to help them cope with their anxiety and encourages them to confront the bad memories that are the source of their nightmares through drawings. He also works to restore a sense of normalcy to their lives by sponsoring safe spaces for children to play.

SAMS proudly sponsors programs in Syria as well as in the surrounding refugee communities. The SAMS psychosocial program in Erbeen in East Ghouta reported benefiting 3,245 children through art and play therapy to help cope with their experiences. In the Za’atari camp, SAMS utilized creative expression through photography, painting, and other creative workshops to help individuals deal with the trauma of war. In June 2015, SAMS began providing psychosocial care outside of camps. The program in Irbid, Jordan brings mental health care to urban refugees who have less access to medical programs than those living in camps. The work of organizations like SAMS and Syria Bright Future helps address the hidden scars of the Syrian people and gives them the support needed to heal from the trauma of conflict.