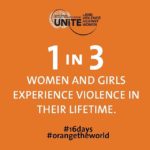 November 25 to December 10th is designated by the UN as the 16 Days of Activism to End Gender-Based Violence. The conflict in Syria and the struggles of displacement put Syrian  women at a high risk of gender-based violence. These 16 organizations provide women with psychosocial care, skills workshops and training for financial independence, support groups, and encourage community prevention of gender-based violence. Take a look at the work of these amazing 16 organizations. 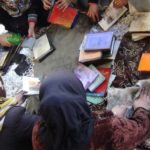 Founded in June 2013, the Mazaya Women’s Center in Kafranbel provides women with a safe place to learn skills despite conflict. The center teaches vital skills to local women including literacy, sewing, first aid, and computer skills to help them achieve financial independence. Located 5 stories below ground, the center also provides women with a community of support during a dangerous conflict. After a fire in November 2014 that was believed to be set by members of a radical group occupying the city, the women of Mazaya began cleaning off their books and rehabilitating their center. Even in the face of violence, these women continue to proclaim Mazaya women’s motto, saying “I am no longer a liability, I am an asset.” 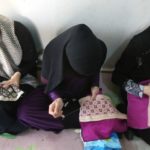 Basmeh and Zeitooneh began by looking at the gaps in assistance to refugees and determining how to fill them. They now provide a wide range of services, many of which work to directly benefit Syrian women. They run a small grant program that provides Syrian women in Lebanon the opportunity to gain financial independence by starting their own business. Their workshops focus on women’s issues such as health, financial independence, and women’s rights. The organization provides educational and financial opportunities to all Syrian refugees trying to rebuild their lives. 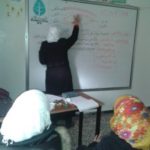 Women for Development Now is one of the largest women-run organizations supporting Syrian women. Started in 2012, the organization began with small projects to support individual families. These projects focus on establishing income-generating activities that support the women, their families, and the local community. The projects include small shops in Saraqeb run by widows, a cow-breeding project in northern Syria, and a dairy shop in Lebanon. In addition to its micro-projects, Women for Development Now runs six women’s centers in Lebanon and Syria. The centers provide psychosocial care, literacy classes, and skill building workshops for cooking, knitting, and sewing. 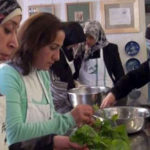 In addition to providing education and rehabilitation opportunities, Souriyat Across Borders works to help women provide for their families. As a women-run organization, they offer workshops and skill trainings in sewing and embroidery. Souriyat Across Borders also supports female breadwinners by selling their handmade products in international charity bazaars. 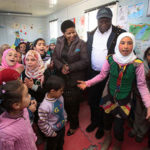 Women and Girls Oasis is designed to provide a safe space for women and girls in the Zaatari camp in Jordan. The UN Women and World Food Program-supported project receives nearly 5,000 visitors each month. The “Eid bi Eid” or “Hand in Hand” project helps female refugees support themselves and their family by teaching literacy, computer skills, and handicrafts. They provide a cash-for-work program for women to use their skills for short-term jobs like tailoring uniforms, gathering recycling, or making handicrafts. Oasis also provides resources for the prevention of gender-based violence. They offer protection referral services for survivors of sexual assault and have created programming to work with men and boys in the local community as well. 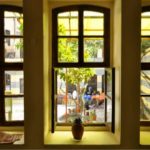 After fleeing to Turkey, Najlaa Sheekh noticed how difficult it was for many Syrian women to adjust to life as refugees. Sheekh began by starting a knitting group where women could share their experiences during the conflict and talk about their dreams, while creating knit goods to sell to support their families. This enterprise expanded to become the Women’s Community Center in Kilis. The center operates on the same model as the original knitting group that combines psychosocial programing with vocational training. The center also provides services for the women in the Oncupinar and Elbeyli camps by offering trips into Kilis for recreational activities. This once small knitting group now helps support 45 women. 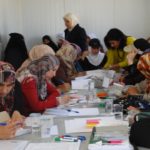 The Zaatari Civic Engagement program works in conjunction with the UN Oasis program. They focus specifically on the role of women as leaders in their communities. They help women learn civic engagement methods and ways to work with men in their community to actively solve critical issues. The program also encourages women to put theory into practice, resulting in initiatives that address child marriage, education for girls, and camp hygiene. Zaatari Civic Engagement conducts sessions for men on how to support women’s initiatives and provide women with greater leadership opportunities in the camp. 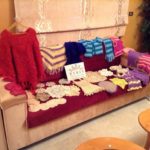 NuDay Syria provides financial opportunities for women and girls. They focus on programs for female-headed households, who are often the most vulnerable and in need of safe and reliable employment. In addition to sponsoring families, NuDay Syria helps provide a platform for Syrian women to sell handicrafts to support their families. NuDay Syria works to improve the quality of life for Syrians in need. 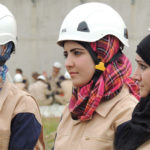 Syria Civil Defense (SCD) is an emergency response team in Syria. They perform search and rescue operations, act as firemen, run emergency shelters, and provide repairs to public utilities. A non-political and non-religious group, SCD works to save as many lives as possible and serve the Syrian people during the conflict.

SDC has helped change community attitudes towards women working as first responders. Many female volunteers faced initial challenges from their communities. However, opinions changed when people realized the crucial role that these women played in saving lives. Oftentimes, family members or women do not feel comfortable receiving treatment from men. The women of SCD serve the vital role of providing critical services to women in emergency situations. Many volunteers report that families are now encouraging their daughters to join the response team. SCD currently has 75 female first responders working in Idlib and Aleppo and continues to provide volunteer opportunities for women who want to help their communities as emergency responders. 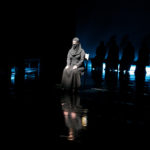 The Syria Trojan Women project began in fall 2013 as a set of drama therapy workshops for Syrian women living as refugees in Amman. These workshops used Euripides’ play, The Trojan Women, which tells the stories of the Trojan women after the fall of Troy, to help Syrian women cope with the experience of life in conflict. The play has since been adapted to help women tell their own stories of fear and loss during the Syrian conflict. Experiences of the women as they perform their stories can be seen in the film Queens of Syria. 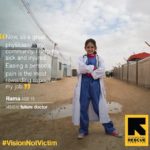 The International Rescue Committee started Vision Not Victims to help adolescent girls explore their potential and develop skills. The project focuses on career goals and pairs girls with a mentor in the community to help them create a plan to achieve this goal. By planning out their career goals, girls and their families are given an alternate vision for their future. They can be doctors, artists, policemen, and more. At the end of the program, girls pose as their future selves for a photoshoot. These photos serve as a reminder and inspiration for the girls and their community about the potential of young women. 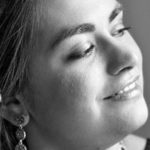 The Syrian conflict has disrupted the education of thousands of Syrians. Women in particular are struggling to finish their education. Prior to the conflict, more than 25% of women attended university. Since the start of the conflict in 2011, that number has dropped to single digits. Less than 2% of university-aged women displaced in Turkey are enrolled in university. 100 Syrian Women, 10,000 Syrian Lives wants to give Syrian women with a chance to finish their education by providing them with scholarships to US and Canadian universities. Their hope is that these 100 women will become the future leaders in Syria and rebuild their homes when the conflict ends. 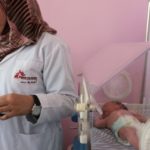 Many female refugees living outside of camps in  host communities experience difficulty accessing vital healthcare. In 2013, Doctors Without Borders opened the Mother-and-Child Hospital in Irbid, Jordan to help address the health needs of women living in refugee host communities. The hospital provides maternal and neonatal care as well as antenatal and postnatal outpatient consultations. The hospital is expanding to include an intensive care unit for newborns and a psychosocial program for refugees living outside the camps. 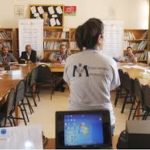 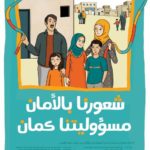 The Amani Campaign is an inter-agency program aimed to help the Syrian refugee community in Jordan address issues of violence, abuse, and exploitation. The campaign provides a consistent message about sexual and gender-based violence and provides guides for how to handle these issues at an individual and community level. The campaign has been implemented by 30 organizations to educate Syrian refugees about the issues of sexual and gender-based violence, including the consequences of early marriage, the dangers of domestic abuse, the importance of reporting assault, and how to maintain family unity. 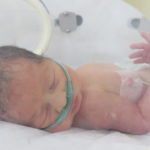 Access to reproductive and women’s healthcare in Syria has been greatly limited by nearly five years of conflict. SAMS works to provide women with these important health services. In 2014, SAMS sponsored 11 OB/GYN clinics in Syria. These clinics treat roughly 10,000 patients each month and provide important pregnancy, neonatal care, and reproductive health education for women in need. When increased attacks on medical facilities led to major population displacement in southern Aleppo, one facility adapted by initiating a mobile clinic. SAMS’s clinics provide women with the specialized healthcare they need and deserve.