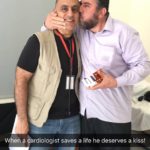 Starting the day with the tragic reality of sadness…I knew it was bad when my translator, Dema Alzein, started tearing up before she could tell me what the patient had said. Followed by a brief moment of happiness at the end of the day.

Patient #1-
Chief Complaint: I’m having chest pain, I think I’m just under stress.
Social situation: Unable to work because of immigration restrictions. Needs some medical testing but can’t afford to pay. His relative needed bypass surgery. Only choice his relative had was 1) to stay in Jordan and die of a heart attack. Or 2) leave his wife and five kids, risk his life to return to Syria to get bypass where he could afford it. He chose option 2. He’s recovered from surgery, but is not allowed to leave Syria to be with his wife and kids in Jordan. It’s too dangerous for his wife and kids to join him in Syria. Pt #1, who can’t find a job is now responsible for his relative’s wife and five kids in addition to his own.

Patient #2-
Chief complaint: my BP is high and I get short of breath.
Social situation: Her 23 year old son was killed just a few weeks ago.

Patient#3-
Chief Complaint: BP is high.
Social situation: One son was killed, three have been captured and she hasn’t heard from them in 3 years. Her 14 year old and her husband are in constant pain from shrapnel in their legs.

Patient #4- Was a follow up from day 1. I was worried about him after my first visit. He came with chest pain and dyspnea on exertion with a dangerously high BP. In the United States, he would’ve been admitted and very likely taken to the cath lab. I made some aggressive changes in his meds, shook his hand and hoped for the best. I kept worrying about him. I asked my translator later that night if we could call him back the next day (today), maybe we could convince the cath team to add him on for a procedure. To our pleasant surprise, he showed up today looking like a new man, left the exam room w huge man hug…See picture, taken by my translator.