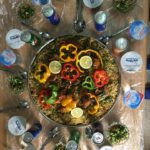 As a part of our missions here in Jordan, SAMS has always spent a ‘day of service’ to the Jordanian people; as a gesture of good will, our physicians spend time serving low-income citizens whose access to regular health care is limited by distance and resources. It is easy to forget that as difficult as life is for Syrian refugees at present, there is plenty of need among their gracious hosts.

In the past, this day has sometimes been slow. Often, locations that are remote have had difficulty ensuring that their communities could come out and take advantage of the rare presence of a team of physicians. Today was blessedly different. The team who ran the local community center worked hard at ensuring good turnout, and our team of three doctors saw over one hundred patients – perhaps the most successful Jordanian day ever. On top of that, our hosts expressed their gratitude for our work with a sumptuous feast that was both entirely unnecessary and deeply appreciated.

These missions have grown since my last one a year ago, and today I was able to witness firsthand the improvements in care that this has allowed us to provide. A 10 year old boy was brought in with a skin lesion on his face that appeared to be the result of injury – but his parents swore that he had not been hurt, and that it had been there for years. Dermatology is not my strong suit, but we do have a dermatologist with us; however, she was 200 kilometers away from me in the Zaatari camp.

“Is it OK if I take your son’s picture? I am not a skin doctor, but I can send his picture to one with us, and she can tell us what to do.”

The parents were a bit taken aback, but immediately grasped the concept. “Of course!” they replied.

I took the picture of his lesion, and sent it to our group WhatsApp. Within 3 minutes came the reply: “Pityriasis Alba. 3 weeks of hydrocortisone tid with frequent emollients.”

The end of the evening was spent with providers who wanted to spend a moment discussing their feelings about what we have seen and done so far. We have heard so many stories of families torn asunder emotionally and seen so many bodies torn apart physically that it is impossible to carry on without processing one’s reactions. I am glad that they we were able to share this moment being human together.

Tomorrow, I go back to serving Syrian refugees in Irbid.

Thank you all for your support.