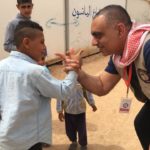 Zaatari is the actual refugee camp. Entry to the camp is under military guard. It is home to over 80,000 people. It costs almost 500,00$ per day to sustain the camp. That’s roughly over 6$/person to pay for food, water and whatever bare minimum is available. By population, it is considered the 4th largest city in Jordan.

It’s one thing to see it on TV, but to hear the stories firsthand from the people living this nightmare is mind blowing. These people have suffered at a level most others could never even imagine. Their families have been broken apart, there bodies have been injured, their emotions have been tormented, with no end in site I’m humbled by a flickering spirit that remains strong.

Sampling from today’s clinic, my translator was a young Jordanian doctor, recently graduated, doing his internship:

1. Patient #1- 8 y/o young girl has congenital heart disease. Hasn’t had an echo in almost 4 years. Now having chest pain. No access for follow up testing. We decide to do a limited echo with my portable machine to try and give the family some reassurance. I ask her and her family for their permission to take a picture.

2. Patient #2- Chief complaint: I was told I had a stroke. She tells me she never had medical problems until she fled Syria a month ago. She has diagnosed herself with certain conditions as the cause for her supposed stroke. Her name is Maryam. She has her two boys by her side. They are the same age as two of my boys. Her personal situation also includes her husband being severely injured. He cannot provide for his family, he is not with them in the refugee camp. She is clearly suffering from her family being broken up in the blink of an eye. To go along with her “self diagnosis” I tell my translator to tell her I’m going to call her ‘Dr. Maryam’. She goes from being tearful to laughing. Every time I refer to her as Dr. Maryam, she laughs more. We offer her reassurance and tell her she didn’t have a stroke.

Patient #3- Chief complaint: My BP is high. She too tells me she never had medical issues until she fled her country. Her husband is now debilitated. She’s right, her BP is high. I give her some meds. She’s curious about my portable echo machine and proceeds to ask if I’d take a look at her heart. I tell my translator to tell her “We are her humble servants.” She smiles and climbs up on the table for an exam. I tell her that her heart is normal and healthy. She smiles with joyful tears.

We saw more patients, all with rich and painful stories. They all ended their visits with a similar quote “I thank God for blessing us with your help, may God bless you.”

I had a brief break between patients. I walked around the camp and saw some children playing. They were absolutely beautiful kids with vibrant smiles. They should be given a chance to grow up in a world without the ugliness of violence and killing.

One week is not enough to help change their lives for the immediate moment, but I will end by paraphrasing a fellow team member (and fellow Blackhawks fan), Greg Lewis “Perhaps the most significant thing we’ve done is to let the refugees know the world hasn’t forgotten them.”

I’m sharing their stories so we don’t forget, but with our collective efforts, we need to get them home to live in peace.