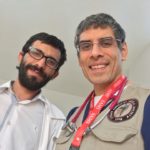 Shortly before the end of my last clinic at Irbid on day 3, I received a Facebook message from one of my Syrian cousins. The message read: “Jihad, this is your cousin R, the granddaughter of your aunt S. I live in Irbid now and just discovered that you are here. Could we see you? Our son is supposed to have surgery, and we are worried.” The issue she described was not life threatening, and normally I would have reassured her that the surgery was appropriate. But there was more to it. I hadn’t seen R since she was a little girl, and had lost contact with my aunt S in Syria a long time ago.

What followed was a text exchange that was both medical and personal.

“I am at the Women’s Union Clinic – but we leave in half an hour.”

“When will you be able to return? Can you honor us with a visit to our home?”

“Unfortunately, I am not coming back to Irbid – but my team will be here the rest of the week.”

“This means you are going back to Amman.”

“May God give you health. Thank you for your efforts. I really hoped that I could win a visit from you at our home. I’m sorry to trouble you, but our son is scheduled for surgery on Thursday, and I really wanted to get the opinion of you or your team.”

“It is no trouble. Tomorrow our team is here, and if you want I will let them know that you will be coming.”

“How are your mother and grandmother – please reassure me about them?”

“They are OK. It has been a long time since I have seen either of them. They are now in a safer place in Damascus.”

“God be praised. When you come – can my staff take a picture of your son? Of your family? For me?”

Against my will, I cried.

Things have a strange way of turning out, it seems. I would not have pushed my team to make a switch for me in order to return. However, later that day, one of the pediatricians scheduled for Irbid on day 5 contacted me and asked to switch for himself. He was leaving early, and needed to be in Amman in order to get to the airport on time. I contacted R. The meeting was on.

So today, I returned to the Women’s Union clinic and began to see children. Shortly after, I was told they had arrived.

I was amazed. R looks very much like her mother, and her grandmother before her, and the years had been kinder to her than to me. Coming in with her two boys and husband, we began to talk simultaneously about her son’s diagnosis and our family. Simply meeting her, and finding that she was well, momentarily lifted from my shoulders the veil of guilt over my family’s plight during this conflict.

In the course of the exam, it was necessary for me to get down to the level of my patient. I knelt down and performed the exam. On standing up, R’s husband looked at me with a grin.

“You *are* an American doctor.”

“No doctor here would ever get on his knees in front of a patient.”

I was able to reassure R and her family that the scheduled surgery was appropriate and safe. I also promised that the next time I’m in Jordan, I’m coming over.

Tomorrow is our last day. Thank you for your support.