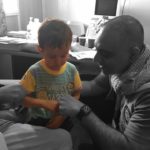 Visited the Zaatari camp again. This officially brings an end to our mission trip.

A special appreciation to Saera Arain-Saleem who allowed me to come on this trip and managed the schedules of 5 kids + her work schedule. Without her, I couldn’t have take this journey. Thank you to all family members for their words of encouragement.

I’m leaving the refugees with some degree of sadness. It’s one thing to see media coverage on TV , but to meet them in person and hear there stories firsthand, the aching in their hearts is palpable. They feel as though the world has forgotten them. I’ve added a few pictures of the refugee camps to give an idea of the living conditions they are in. Some have been there for 4 years. As I said previously, by population, it’s the fourth largest city in Jordan. They have a little bazar, in a sort of tongue and cheek manner it’s referred to as the Champs Elyesees (for my Chicago friends, this would be the magnificent mile) where there is dirt road lined with a string of bazaars. There are also donkey carts slowly pulling carts of fruits and vegetables for sale. I felt as though I was in a city dating back to the early 1900s.

Overall, we saw close to 6000 patients in clinics. Between orthopedic, general and plastic surgery, nearly 30-40 procedures were performed. Add in cardiac catheterizations close to 40 stents were placed.

Back in Chicago, I’m a cardiac Electrophysiologist. This means I’m a ‘fancy’ sub-sub-specialist and often spend my days doing invasive procedures. I like my job and work with a great team. Here at the refugee camps, I become a general cardiologist, often times a general internist and sometimes even a pediatrician. No matter what hat I’m wearing, I’ve learned the most important thing to do for the refugees is to just listen. Again, they feel as though they are forgotten. The clinic visits are filled with amplified issues, sometimes physical, almost always emotional. I have to gauge how much one may be effecting the other (physical vs emotional). Do I suggest new meds, higher doses of current meds or somehow reassure them that they’re ok without dismissing the trauma they have been through?

Patient visit 1: I was asked to see an 18 y/o for a fast heart rate. Someone had already put him on medication. He was sent to me because the meds weren’t working. One look at his ECG and I knew it was clearly a slightly faster but normal heart rate, likely related to anxiety. I tried to reassure him but I could tell he wasn’t buying it. After all, if he can’t trust the world, why the hell should he trust me? I offered to do an echo of his heart and show him the image of his heart pumping at a healthy level. I immediately stopped his meds and told him he was probably dehydrated. I could see the look of relief on his face. The last thing an 18 year old needs is to think he has a cardiac condition.

Patient visit 2- 35 y/o male, moderately overweight, w legitimate HTN on meds. BP is climbing due to conditions in the refugee camp. I mean what 35 year old would want to sacrifice his most productive years of working, sense of purpose and independence to live in a tin can, one room apt off a dirt road? I told him we needed to increase his BP meds. After a series of questions from him as to why this was happening, he finally asked me why he was so tired. Rather than stating the obvious that life surrounded by war, lack of employment, no freedom with no end in site completely sucks, I decided to gently pat/poke at his rather large belly indicating he needed to lose weight. Yes, I went to a refugee camp and tickled a grown man. He started laughing. The point was, this could also be a reason for higher BP and fatigue and if he lost weight maybe everything would get better. It’s something he could possibly take control of vs everything else around him.

Today, however, I had to put on a hat that was perhaps the most uncomfortable one I had to wear all week. This is the one that nearly brought me to tears in clinic today. I held my emotions in check as I did not want to add to the families worries. Today, I had to be a pediatric cardiologist.

Patient visit 3- was asked to see a 4 year old boy with Long QT syndrome. For my non-medical friends this is a potentially lethal cardiac arrhythmia condition. A simple medication can be the difference. To demonstrate the how serious this condition is, his two older brothers died from it. His father looked desperate, he was frustrated by how difficult it was to get a renewal for his prescription. He normally takes the medication 3X daily. I wrote his prescription for 4X a day so the pharmacy would dispense extra doses to keep him covered. In any other country or if he didn’t have to live as a refugee he would never have to worry about running out of meds. Instead, his father, who previously lost two sons, now lost his house has to constantly worry about getting his sons medications. The thought of this boy getting lost in the shuffle had me on the choking back my tears. If this was my patient in Chicago, I’d make sure Lynette Mulder Steck andMargaret Ann never let this kid off our radar. Never.

Patient visit 4- Another young child, a 2 year old with a congenital cardiac malformation. The question for me was has his condition worsened. By his symptoms, possibly yes. Again, there is no system to get him to the appropriate specialist. I did a limited echo as he clung to his bag of chips. As a side note, the family pointed out a rash. This was no rash. It was dirt secondary to inadequate bathing due to poor water supply. He was cooperative for the scan in a frozen scared kind of way, he didn’t cry or even whimper. Thankfully I was able to reassure the parents there was nothing of immediate urgency on the echo imaging but he needed to be seen by a pediatric cardiologist sooner rather than later. It’s possible he may need a procedure in the near future. How certain am I that he’ll get this opportunity? I honestly don’t know. Yep, imagine that ever being said regarding a referral to a specialist for any of our kids.

I’ve met some amazing people. The refugees have done more for me than I have for them. Their spirit has been nothing short of inspirational. I hope and pray for a resolution to their situation so they may return home.

Thank you to all of you who have read my posts, your comments helped me tremendously. On behalf of the refugees, I thank you for sharing my posts or even talking about this humanitarian crisis. Let us not forget all victims of war, wounded veterans, injured civilians and displaced people.