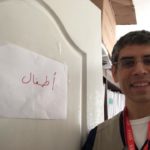 “Jihad I just had to rush a child to Emergency. I managed to stabilize him once we reached there but there was an argument because they wanted his paperwork, registration etc but I started treating him because he was crashing. To cut the long story short he’s in ICU. We’ll need to discuss funding.”

I stared at the message from another provider across the mission’s WhatsApp group. It was 1:30 in the afternoon; where was this? I couldn’t remember where we had sent him. My last day was supposed to have been in Zaatari; perhaps this was there? Where was the pediatrician who asked me to trade with her, so she could go there one last time? They would have had to be driven all the way to Mafraq.

“Where are you today
Talk to me off list”

This wasn’t supposed to happen. Neda El Khair was a local clinic in Amman – not far from Zainab, the local clinic where I had agreed to go. Our day was done; I had seen 39 patients, but the vast majority were bread and butter – ear infections, worries about flat feet and poor appetite. No one here was supposed to be this ill.

Then again – no one here was supposed to be a refugee, either.

Our van showed up to pick us up. Serendipitously, the driver needed to stop at Maqasid. He eased in front of the entrance and walked inside.

No answer. I thought for a moment about charging in – but I had never been inside Maqasid before. It is a hospital aimed at providing services to the low income community, like a county hospital in the US. It was older, and I could easily wind up lost in a labyrinthine dead end.

The driver returned; I decided not to chance it. We began to return to our home base.

“We’re back at the hotel. Child is called K and he’s in ICU”

Receiving this message as we pulled in, I found N in the lobby. The details poured forth. A five year old child presented with fever, audible stridor at rest, and an elevated respiratory rate. He had poor air movement and was retracting.

Instantly, I assembled the likeliest diagnosis: asthma complicated by severe croup. With the viral infection triggering asthma and a closing of the lower airways, and croup closing the vocal cords up top, it was the perfect storm. Indeed, it fit; in the ER the child had good oxygenation, but appeared to fall in to more respiratory distress when given nebulized albuterol. It would normally help an asthmatic attack, but it can also have a paradoxical constricting effect on the upper airways. In addition, the stress probably meant adrenaline was locking his lungs down a bit.

There had been quite a scene in the ER over paperwork, but eventually the staff agreed to take the child back. Once there, he was quickly promoted to the ICU and given steroids.

I rolled the history over in my mind. Had we been back in the states – If my pulse ox had been good, I would likely have given one or two albuterol treatments in my office along with injected steroids. I could have also observed him for some length of time, and perhaps even have kept him out of the ER. Yet here he was, in the ICU – because he as a refugee has no access to preventative care, and because we as a medical mission filling a stopgap that a primary care physician should occupy had no ability to give him the medications to keep him out of the ER in the first place.

I spoke to the SAMS local office. We would cover the costs of his care. Assuming the child indeed had croup with asthma, he was getting the correct treatment, and there was a high probability that he could be out of the hospital within 24 hours.

I looked at N. He was tired, as was his interpreter. My team has worked hard, and worked well. But we can never work hard enough to replace the stability that the refugees’ dispossession has stripped away.