Give Their Stories Happy Endings by Hiba Shaban 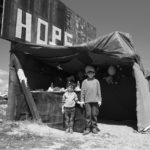 A few weeks ago I met a Syrian man sitting on the side of the road near a gas station in Greece where he and his family had set up a little picnic and were enjoying a light lunch. He told me he was trying to find a way to get all eleven members of his family to a government camp where they had a better chance to leave Greece.I asked him what his 5 year old daughter’s name was and he replied “Oroobeh” which means ‘of the Arabs’, “As in the lost Arab world” he explained in a sad voice. Every day I wonder if he was able to get himself and his family to those camps and feel upset that I couldn’t do much for him.

I was in Greece volunteering with the Syrian American Medical Society (SAMS) as a translator for non-Arabic speaking doctors. We spent the week in an informal camp known as Eko Camp, named after the gas station that the Syrian refugees settled around. The tents are unstable and rain causes serious problems, the food they eat is minimal and lacking in nutrition, and their hopes are dwindling.

The stories I heard left me in awe, whether of triumph or of extreme hardship. Attempted suicides are common and in the one week that I was there we had two emergency cases of overdosing on medication. Whenever I had the chance I would ask the patients about their journey, and too often I heard, “I wish I had died back home in Syria, it is better than dying this slow death here.” Families have been separated from each other, and young siblings take care of each other because they only have each other left. Almost everyone had a story about a loved one who died back home, or a loved one who was left behind.

No one liked to think about the future, it was deliberately ignored by many. If you asked them to come back in a couple of weeks for a follow-up their wide eyes would tell you they didn’t expect to be here. Most of them wanted to end up in Germany for a better life and they often asked us if we had heard when the borders would open again. We could only tell them that we didn’t know, and it was the worst feeling not to be able to give them any hope.

In the gas station I met a man who started his own restaurant at the camp, and he proudly told us how it happened. When he arrived at the camp he introduced himself to the gas station owner, asking him to try his sandwiches. Soon thereafter, the owner invited him to open the restaurant that he was now profiting from while he waited for things to change in this camp. He reminded me of the perseverance of the Syrian people, and gave me hope for a better future for them.

During my time in Greece, SAMS also visited another informal camp known as Idomeni Camp. Refugees had settled on train tracks and blocked trains from passing as a form of protest, asking for the government to open the borders and let them through. One man we spoke to equated the Greek government to Syrian president Bashar Al-Assad’s regime because they stopped giving the refugees food so that they would leave. “I was hungry in Syria and I’m hungry here, but I will die here if I have to because we will be forgotten in the military camps,” he said. A few days ago I learned that the riot police forcefully evacuated the camp and took everyone to military camps.

All I can think of is how much the international community has failed these people and countless others I haven’t met, each of which had a  different tragic story to tell. I wanted to apologize but my apologies would be in vain. Every day that passes means more lives lost and more futures taken from innocent people that, just like us, want their kids to grow up in a safe environment, go to school, and make them proud. They no longer believe what first world leaders say because time and time again, they’ve been let down. As we move forward, we must listen to the voices on the ground as well as those fleeing: No-Fly zones need to be implemented in Syria to give civilians the option to stay, the “red line” of chemical weapons attacks should not be a joking matter, and war crimes must be punishable by international law. Let’s work together to give these tragic stories happy endings.

Hiba Shaban is completing her Master’s in Bioinformatics at the University of South Florida, and is currently the vice president of Students Organize for Syria at USF, a student led initiative that stands in solidarity with the Syrian people in their struggle for a freedom and human rights, and to raise awareness of and help alleviate the humanitarian crisis in Syria.