My Days in the Refugee Camps in Thessaloniki, Greece – by Dr. Lata Cherath 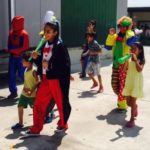 All the days seem to blend into each other – the events of yesterday bleed into today and I know I will see the same faces and hear the same stories tomorrow. Sometimes the stories are told directly to me – although I needed a translator. Many a time, the stories are left incomplete as the translator would break down and cry unable to carry on. At other times I heard the stories secondhand – from other physicians and volunteers who speak the language and did not need translators. These are stories of devastating loss, of profound sadness at the betrayal of the world at large. I cannot bear to look into sad and vacant eyes of the refugee when she tells me that she lost her loved ones, or they got separated from her because they waited for a bit too long! Another one says that they prayed and were hopeful that the world community would step in and the carnage would stop! But there was no help and then the unthinkable happened! And when it did – when his house was destroyed by a barrel bomb and the flesh of the ones he loved the most in the world was splattered all over the wall, he was forced to finally get up and walk away!

Little kids – innocent beings – were witness to random beheadings in the streets as they played. They  were afraid to move inside their own homes as they knew the snipers outside had guns aimed at their windows and would not hesitate to shoot if they spotted movement. I heard accounts of women and children crying, pleading for the life of their loves as they ran after the vehicles in which the men were being taken away, shoved into the trunks of cars! It seems unreal and I cannot believe that I have it in me to sit and listen to these stories! If I were reading a book – I would put the book away – I have no stomach for this, I’d say! But here I am – sitting and listening to these stories! Listening – because another human being is telling me his gut wrenching story – and I cannot get up and leave. I cannot close this book and put it away! And so I sit down and listen to:

– Stories of blood curdling fear – as 45 of them, in the darkness of the night, get into a little rubber dinghy that was intended to carry only six. Of watching bobbing objects in the sea – not knowing if it was a living being or a corpse! Being paralyzed by fear that any movement would destabilize the little rubber boat – they opted to do nothing as they prayed for forgiveness for their inaction!

– Stories of utter desolation and humiliation. These proud people refused food when it was offered to them by the local charities upon reaching dry land. A teenager told me that he declined the food because he felt he would much rather work for food than accept handouts! However, after three days of torrential rain and being drenched to the bone – he stood in line for 2 hours for a warm blanket and another two hours for a bowl of soup! Tears roll down his cheeks liberally as he tells me this story – as it does mine!

So what did I do during my 9 days in Thessaloniki, Greece? I listened to their stories – even when I could bear it no more! When I thought I would lose it all and bawl like a baby – I sat still and listened to anyone who would talk to me. I cried unabashedly.

And through it all – we doctored the best we could. We looked into their eyes, ears and throat. We listened to their heart and lungs; we ordered blood tests and X-rays, reviewed labs and images. We prescribed antibiotics for their infections, repaired broken skin, and bandaged their wounds. We referred them to specialists when we felt it was warranted, we sent them to the hospital when we thought they needed immediate intervention. We shared ourselves and our skills (limited though they may be) with them. And, while doing this, we hoped and prayed that we (through SAMS) were able to provide some comfort and reassurance and create a semblance of normalcy in this otherwise horrifying, unreal world!