A Leader in Her Community: Meet Hind

Hind El Hamade, 37, is a Syrian woman who lives in a small settlement in the Bekaa Valley area with her five children. Hind lost her husband in Syria, and was forced to leave her parents there when she fled. She struggles as a single mother, responsible for her family, and from the trauma of losing her home. We recently met Hind during SAMS’s recent OBGYN medical mission to Lebanon, where skilled medical volunteers provided reproductive health surgeries and services to Syrian women living in refugee settlements.

“My family, my house, my city, my dream and everything I had for myself has been destroyed in Syria,” she said.

Because of her losses, Hind must play the role of both mother and father. She works hard to secure basic needs such as food and adequate shelter, saying “I wanted to save my children and myself.”

After months of depression, anxiety and sleep deprivation, Hind started suffering from a vaginal disease and needed surgery. She recognized that her psychosocial situation and emotional status negatively affected her physical health.

The surgery in Lebanon costs around $1500, however, the UNHCR cannot provide this type of medical services and the Ministry of Health is not in charge of hospitalization for Syrians. As Hind said, “the lack of money and the lack of access to care have a negative impact on my psychological situation.”

In spite of her disease and her situation, Hind decided to rebuild herself to cope with the stresses of life and to work productively to make a contribution for herself and for her community. She is now in charge of the whole settlement, and people refer to her as “the Shawish,” or “leader.” She is providing support for women in the settlement to protect them from psychosocial distress and to encourage them to deal with the difficult living conditions. During SAMS mission in Lebanon, Hind was screened by a doctor and underwent surgery, after which she stayed in the hospital for one night, and returned to her family and community the next day.

“I am being thankful for being supported by SAMS, I am able now to care more about the women in my camp. It is time to rebuild everything.” 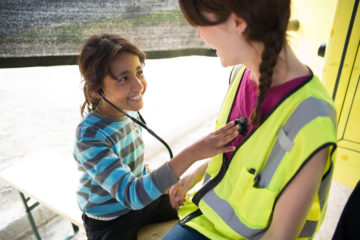 “Working with SAMS made me feel part of a brilliant community of great minds and spirits, committed to care for communities of refugees, not just through health but also through advocacy,” SAMS Global Response volunteer Dr. Kate Markham said of her work with SGR in Greece.  Dr. Markham volunteered with our Global...