Breathing in a Pandemic: How Oxygen Helps Save Lives in Syria

The ongoing COVID-19 pandemic continues to exhaust our energies, medical capacities and claim human lives across the world. Over the last year and a half, the healthcare system in Syria has faced enormous challenges in attempting to circumvent the spread of the virus while simultaneously facing severe shortages in equipment and qualified staff due to the decade-long conflict in the country.

As part of a concentrated effort to respond to the virus in Northwest Syria, SAMS has participated in efforts with other health organizations in the region to prepare isolation centers in existing hospitals specifically for COVID-19 patients. This larger effort aims to curb the spread of COVID-19, as hospitals in northwest Syria are already under strain due to equipment shortages, the constant state of emergency response, and ever-decreasing medical staff capacities. As it stands, SAMS established and operates four COVID-19 hospital-based isolation units (HBIUs), including three for adults, and one for children. The HBIUs encompass 210 beds and 90 ventilators in total. These hospitals produce more than 2,880 m3/day of Oxygen, which is equal to 720 oxygen tanks, each containing approximately 660ml of oxygen per day. Despite these efforts, this production barely covers 50% of the HBIUs’ oxygen needs. 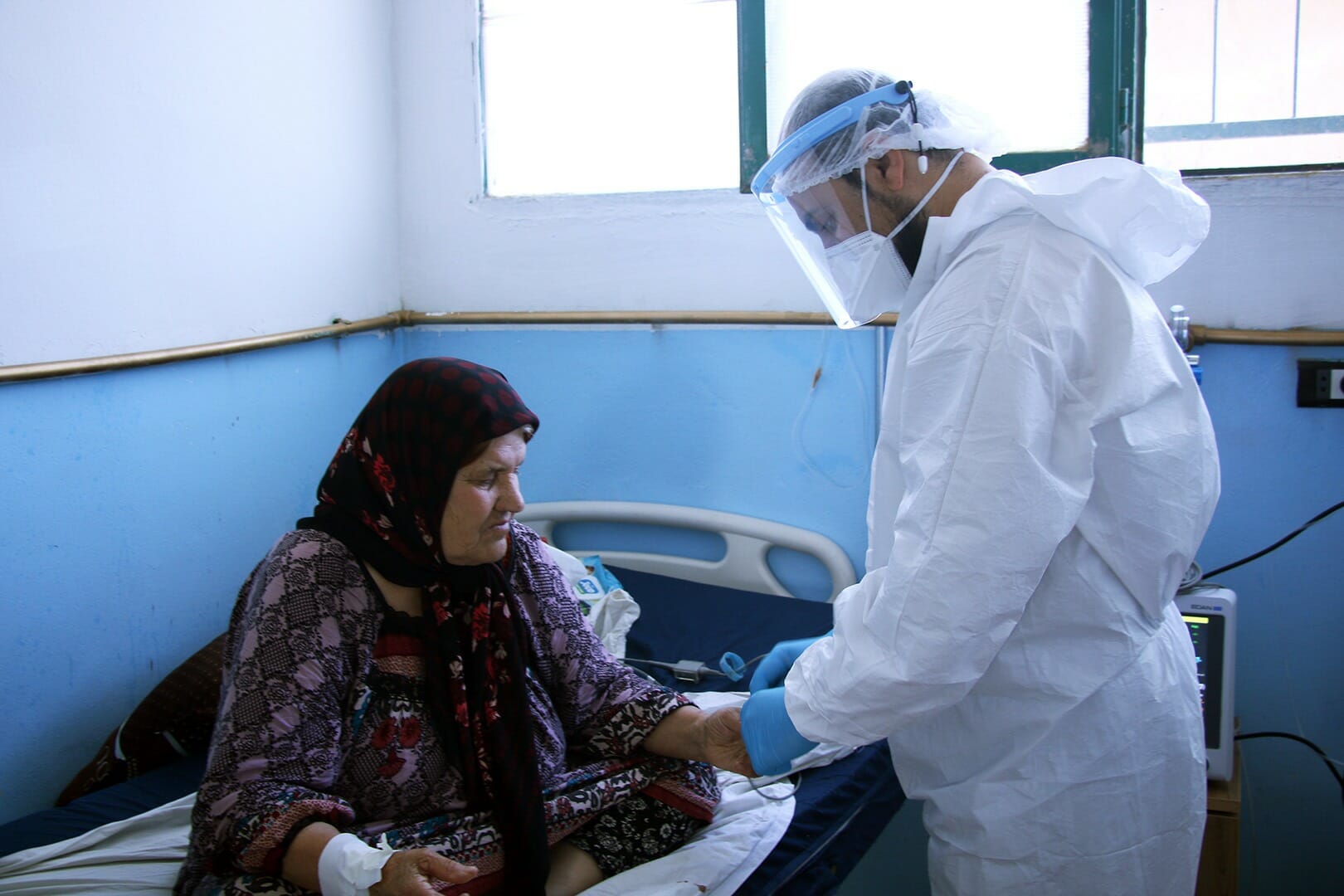 Oxygen shortages have been experienced worldwide since the onset of the COVID-19 pandemic. Earlier this year, shortages were reported in Brazil, Lebanon and India, among other countries, which led to severe repercussions and avoidable deaths. In northwest Syria, the lack of available oxygen is particularly acute. As it stands, 3,000 out of 61,586 confirmed COVID-19 patients have been hospitalized since the onset of the pandemic. As of September 2021, admission rates to our COVID-19 treatment centres have reached full capacity, with all facilities reporting oxygen shortages. Should access to oxygen be stopped for any reason, patients face a higher possibility of death. There is also a lack of spare parts, making it difficult to repair stations that break, further increasing the level of risk facing patients in need of oxygen. The situation has worsened exponentially, as the COVID-19 death toll in September reached over 200, compared with 50 COVID-19 related deaths reported in August. Daily test positivity rates have reached 58%, a record high since the pandemic began.

The importance of oxygen tanks is illustrated by Khaldiyah, a 70 year-old immunocompromised patient, who was brought to SAMS’ isolation unit at Al-Amal Hospital. Khaldiyah’s situation was deteriorating rapidly upon her arrival, and her doctors were extremely worried about her survival.  After carrying out an x-ray, doctors also found ground-glass opacities (the radiology term describing the appearance of fluid in the lungs on a scan) in her lungs, in addition to the immense suffering respiratory distress, acute cough,fever, and skeletal pain that Khaldiyah reported. Upon placing her on a CPAP device (a machine that uses a hose and mask or nosepiece to deliver a steady flow of oxygen), Khaldiyah’s respiratory distress eased and ability to breathe improved. Our medical staff monitored her situation until they began noticing a great improvement. Within a few days, Khaldiyah’s condition had stabilised and she was soon discharged from the ICU to rejoin her family at home. 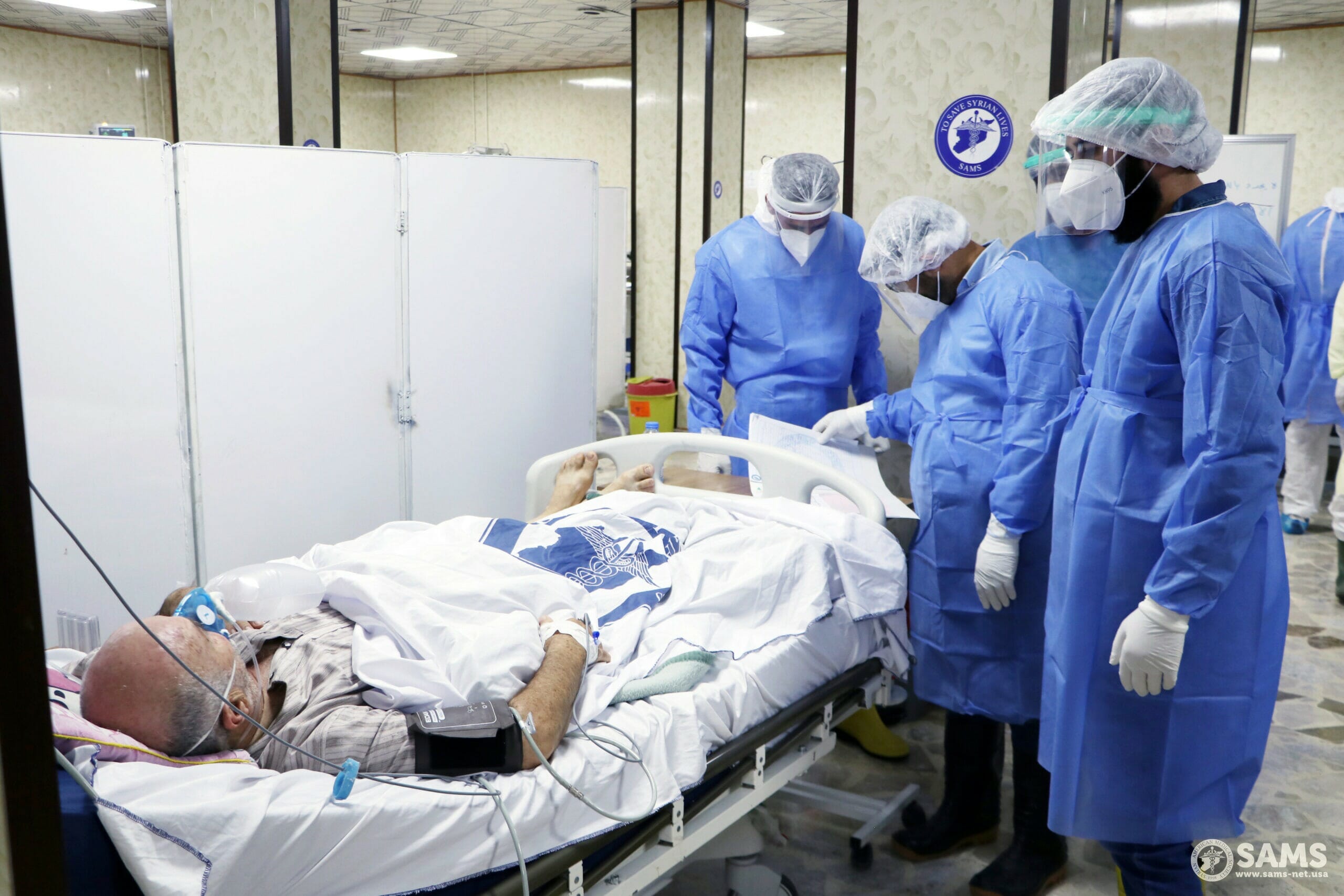 Access to oxygen was a crucial, potentially life-saving element of Khaldiyah’s treatment. Having been internally displaced from Hama and struggling with various chronic illnesses, she was considered a high-risk patient.

“Prior to coming to the hospital nobody knew how to help me or what was wrong with me, and once it became known that I had contracted COVID-19, the medical staff played a huge role in saving my life.”

As is often the case, underserved communities are frequently left behind when it comes to procuring crucial supplies and services needed to fight COVID-19.  This is further evidenced by Khadliyah’s story, which is shared by multitudes of other Syrians. The ability of staff in such dire conditions to save lives when given the tools they need to succeed highlights the importance of tirelessly striving to ensure that health facilities on the ground receive the resources they need in order to continue saving their patient’s lives.