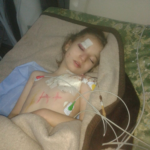 The crisis in Syria impacted the lives of millions, and has desperately strained Syria’s healthcare. However, the situation is far from hopeless. Medical personnel are among those who risk their lives every day to save the lives of civilians. SAMS is happy to share a wonderful story of success and from one of our hospitals in Aleppo!

Meet Ibtisam, a 7-year-old girl from Aleppo. One day Ibtisam  was collecting water for her family far away from her home near Aleppo when she was caught in a barrel bomb attack. Barrel bombs are used every day across Syria in an aggressive government strategy attacking public spaces. These bombs, which have minimal accuracy, are packed with shrapnel, TNT, and sometimes chemical gases, and then dropped from high altitudes. As a result, these bombs often kill mass numbers of innocent civilians, like Ibtisam. According to Physicians for Human Rights, “indiscriminate barrel bombs, which were banned under UN Resolution 2139, were used on at least 32 occasions to attack hospitals.” The barrel bomb attack that hit Ibtisam left her with many injuries, including a vascular wound and broken leg. She was rushed to a nearby SAMS hospital, to receive an emergency arterial link and external fixation surgery and subsequent ICU care.

The emergency ICU work that SAMS supports in Syria is vital to saving the lives of civilians, just like Ibtisam. These ICU facilities see and treat patients with multiple trauma, chemical weapons injuries, and victims of burns and shelling. These ICU units require advanced skills to operate and treat incoming emergency patients. Addressing this need, SAMS provides advanced life and trauma support training, disaster management training, and specialized web-based training to keep these medical personnel ready for whatever injuries they must treat. SAMS also provides these units with critical equipment, such as ventilators, defibrillators, and IV pumps, that can often mean the difference between life and death.

After receiving emergency care, Ibtisam is now doing well and at home with her family. She is one among the lucky ones who survive these indiscriminate attacks. Ibtisam and her story give us hope for the future of Syria- SAMS is proud to work with and for such strong and resilient Syrians.