Nearly 1 million Syrian refugees reside in Jordan, half of which are children. According to UNHCR, over 80% live under the poverty line and are unable to access the care they need.  In Jordan, SAMS operates a number of medical relief programs, providing free medical services to Syrian refugees and underserved host communities.

In Al-Zaatari Refugee Camp, which is home to 80,000 Syrian refugees, SAMS operates a medical center, providing emergency, dental, and radiology services to the camp’s residents. The center also operates a well-equipped pharmacy. All services and medications are provided free of charge. The center was launched in 2017 to fill service gaps in the camp, offering services tailored to the needs of beneficiaries in the camp.

“At the SAMS Medical Center, I was able to receive all the services I needed for my diagnosis. The team here conducted the necessary tests and provided diagnostic radiology exams. After my diagnosis, the doctor prescribed medications from their pharmacy. 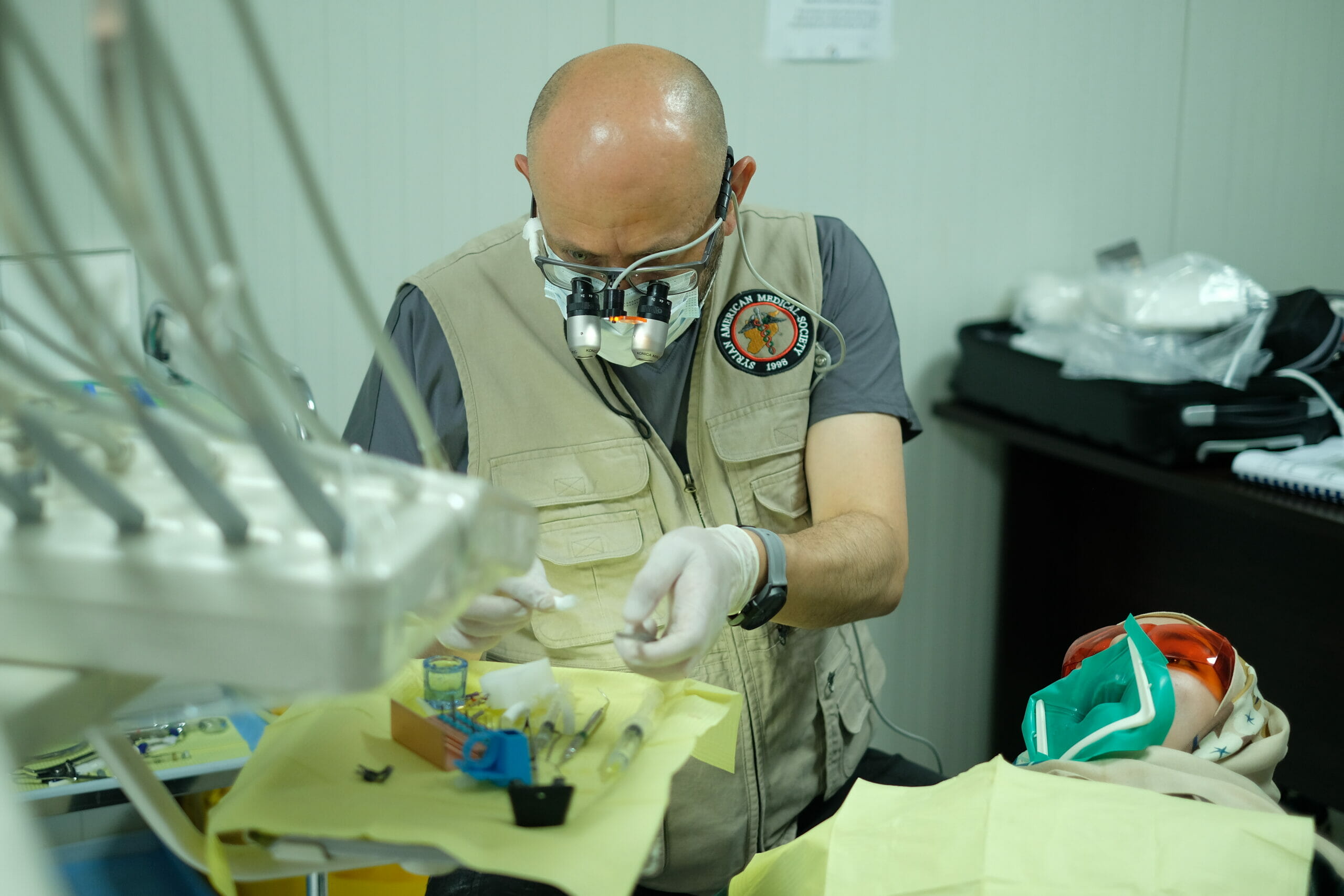 Psychological and mental healthcare services are vital for Syrian refugees who have been forced into displacement, many of whom are children. SAMS initiated its psychosocial program in Amman as early as 2012. Since then, SAMS has been providing psychosocial care to refugees in Amman and Irbid who have limited  access to these services. These programs use art and play therapy such as photography, painting, and creative workshops to help individuals heal and cope with the effects of trauma. 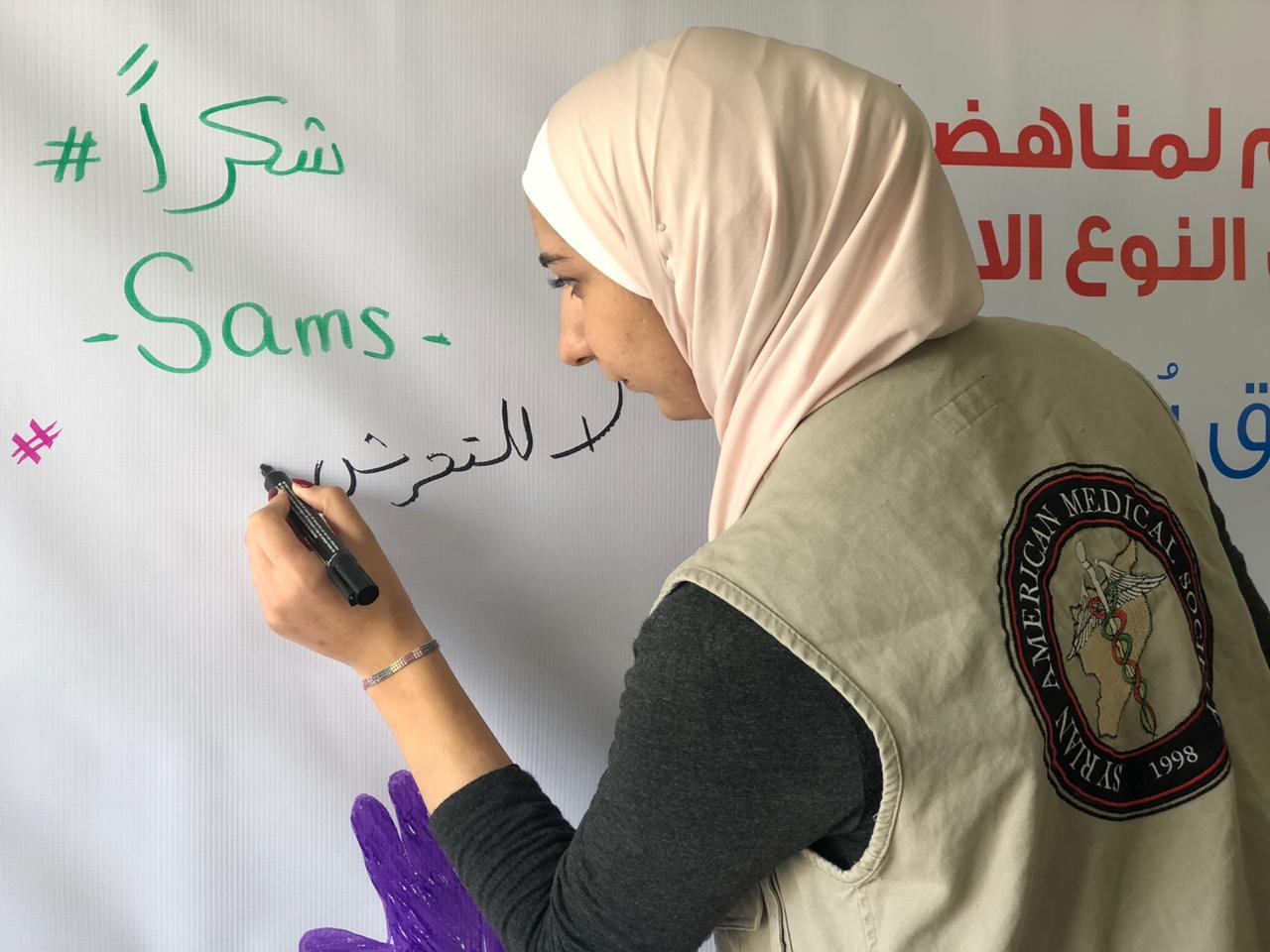 In 2019, with generous support from the Schooner Foundation, SAMS  implemented a number of mental health, psychosocial support (MHPSS), and gender-based violence (GBV) outreach and awareness activities in the Amman and Irbid governorates. Family-based assessments in Amman and Irbid are used to identify vulnerable individuals in need of MHPSS services and refer them to medical and social assistance. SAMS outreach teams consist of social workers and trained volunteers which  target underserved areas with high concentrations of Syrian refugees. Additionally, SAMS MHPSS team also conducts ongoing training for mental healthcare providers and social workers in Jordan in order to best address the needs of vulnerable communities. Learn more about our MHPSS programs and impact in the 2020 Annual Report.

SAMS volunteers participate in frequent medical missions to Jordan to support our ongoing medical relief programs across the countries. Missions allow health workers of different medical backgrounds to volunteer to provide Syrian refugees and underserved local communities with the specialized care they need. Through these specialized medical missions, SAMS seeks to fill  the gap in secondary and tertiary healthcare for those who otherwise would be unable to access vital care due to the prohibitively high cost of specialized and surgical care. 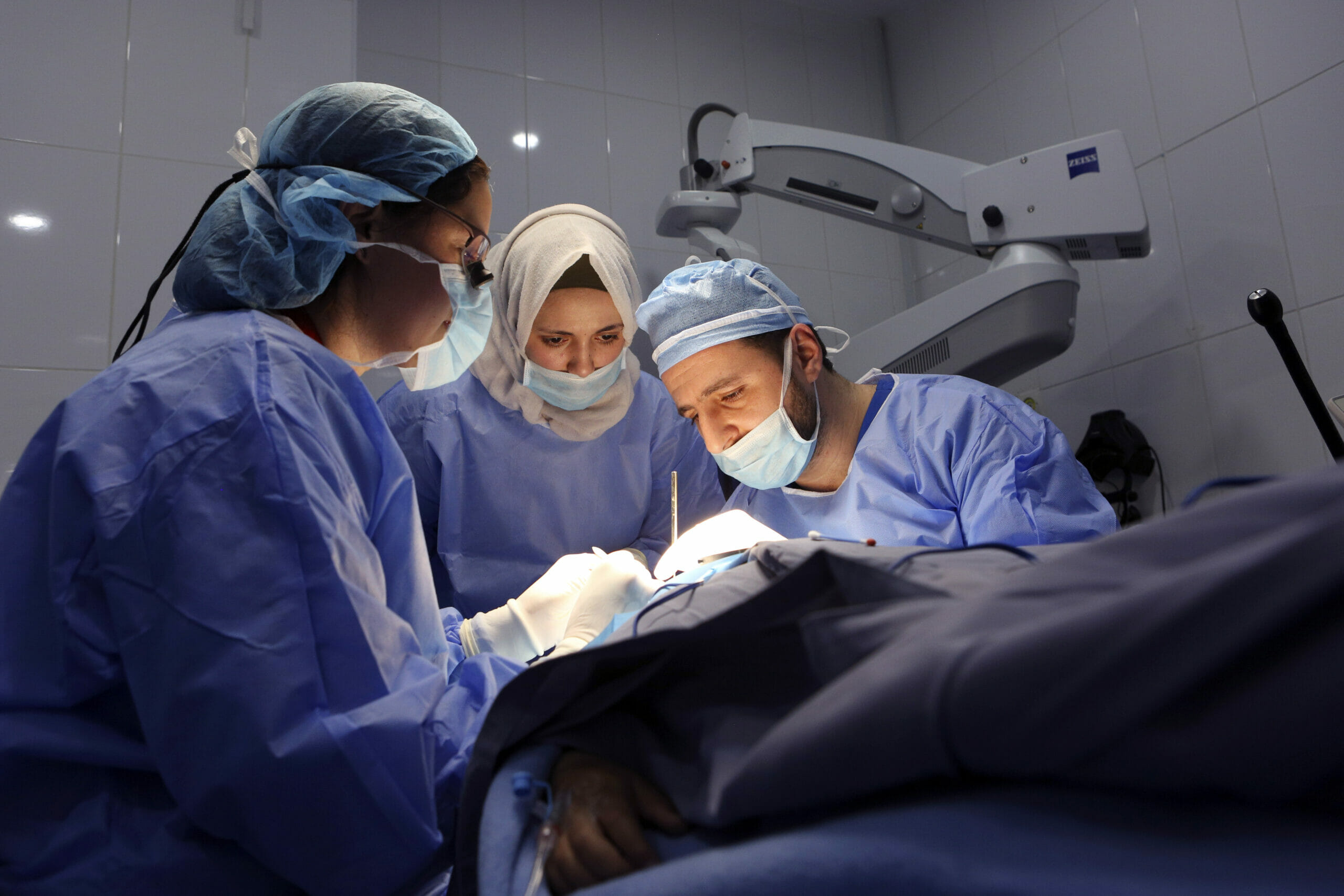 In April 2019, SAMS launched its first-ever Hearing Aid Medical Mission to Jordan, providing 114 young refugees with hearing aids and speech therapy services. Following the mission, our specialized team of speech pathologists in Jordan worked with these children to improve their overall communication.

“When [Muamen] initially put on his hearing aids, he kept repeating my name and his father’s names several times as it was the first time he was able to hear his own voice. He was extremely excited.” 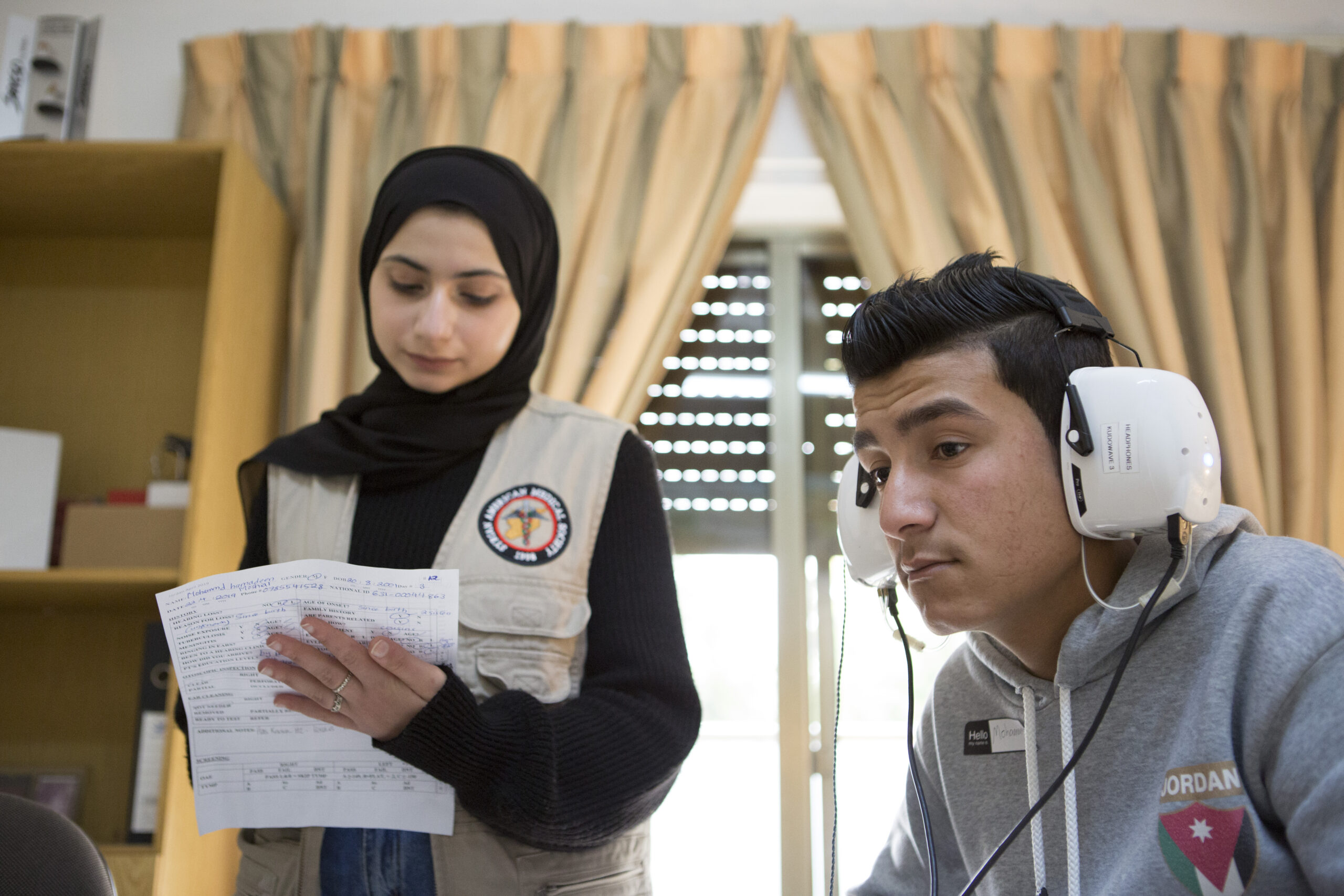 SAMS Innovative Transplant Program in Jordan continues to have a lasting impact on our patients who needed post-kidney transplant medications, laboratory assessments of their kidney function, and quarterly evaluations of their general status during medical missions. Additionally, SAMS provides ongoing treatment to patients suffereing from diabetic retinopathy. retinal detachment and hemorrhage. 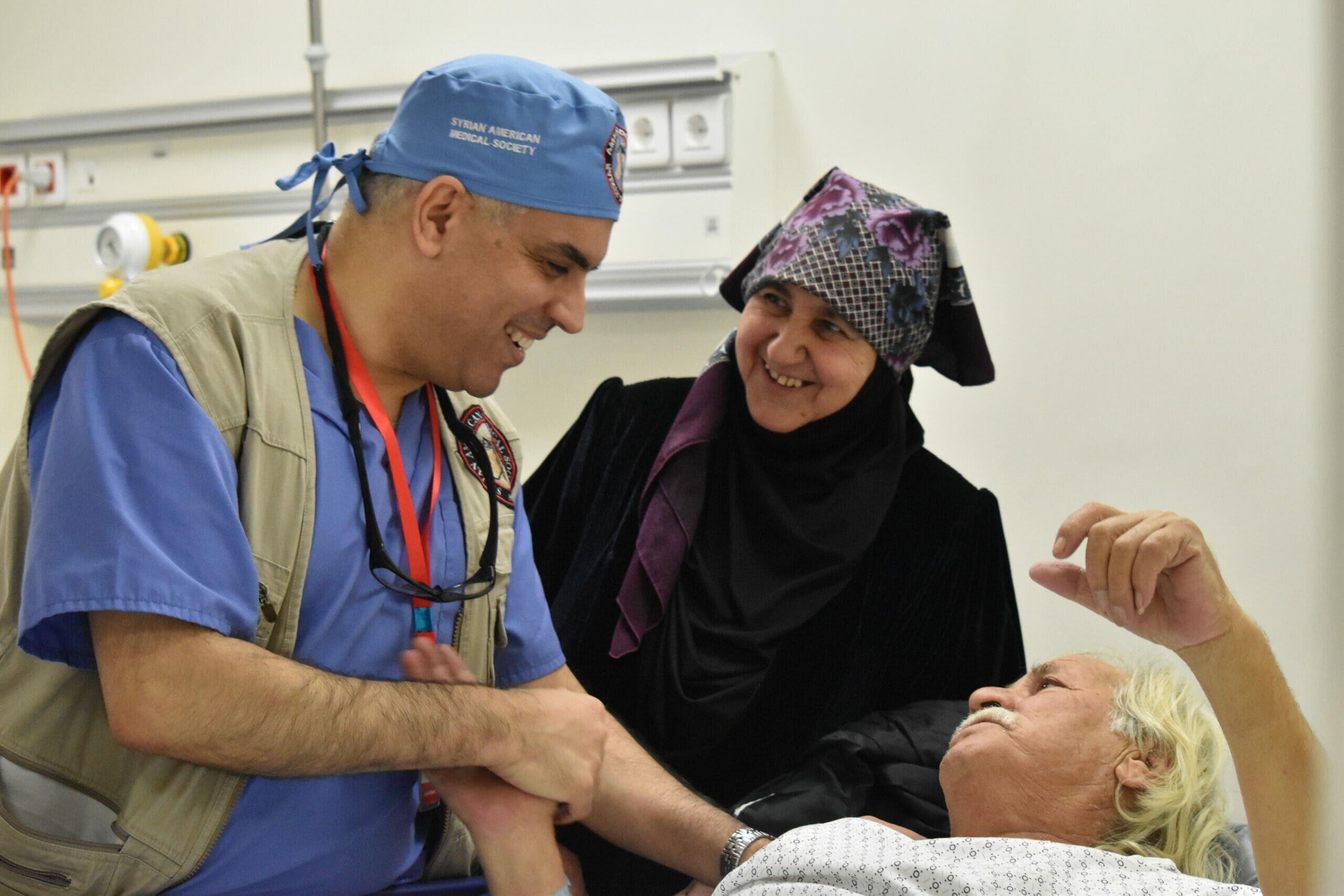 Through its medical residency program in Jordan, SAMS continues to support displaced Syrian medical graduates doing their residency training in Jordan. In 2019, SAMS supported five residents enrolled at the Islamic Hospital, and one resident enrolled at the Jordan Hospital, in the specializations of emergency medicine, internal medicine, ophthalmology, and pediatrics.

“Receiving the SAMS scholarship was one of the best things that has ever happened to me because it came at a very difficult time for me as a recent graduate. It was the only paid opportunity for Syrian doctors.”