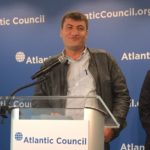 The Syrian refugee crisis has been worked on and addressed by dozens of governments, international organizations, and disaster response teams. However, the often overlooked and arguably most effective organizations to address the crisis have been the civil society and local organizations on the ground in Syria and in neighboring countries. Among the most notable civil society leaders is Raed Fares, president of the Union of Revolutionary Bureaus, one of the active and effective organizations handling day to day relief efforts on the ground. Raed also has an incredible personal story that tells the daily struggle of overcoming the horrific living conditions in Syria today.

Raed began his civil engagement in April 2011 when he joined the protests against the Syrian government. He has been shot several times by ISIS assassins, and his car has been rigged with improvised explosive devices- or IEDs- five times, two of caused him minor injuries. In the face of raging adversity, Raed persists with his various aid programs and his radio show.

Radio Fresh, Raed’s prized FM radio station, is the most listened to radio station in Syria. He broadcasts information continuously on local and international news, and the various civil society organizations that provide services for people in need. More importantly, he warns the population about imminent aerial attacks using his network of spotter towers.

Recently, Raed came to Washington, DC and met with various congressmen and think tanks, gave speeches, and told his storied to hundreds. Through his intense sense of humor, Raed has distinguished himself as a humble and principled man. Raed, like many other civil society leaders still inside Syria, is pleading for further U.S. engagement and funding for programs The money that is donated to him goes directly to supporting education for women, employing people at the radio stations, facilitating water deliverance to local populations, and even providing energy and electricity for communities.

To find out more about Raed and his work, read about Radio Free Syria in a piece by the New York Times.

To find out how to donate to his organization, visit his Facebook page for more information.