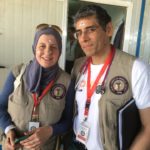 I couldn’t sleep last night. At 4, I woke up, my jetlagged body allowing my mind to race; after a while I simply got up and began to prepare. I Facetimed my kids and my wife separately, everyone carrying out their usual routines without me. My absence from home gnaws on me – all the more that this time, everyone seems used to it.

For the past few weeks, I have made a big deal of trying to have everyone load the buses for their clinics on time. “On time” is a relative term when 80 people are involved. Last minute problems – “Where is my vest?” – “I just got in, and need to get my meds” – “We’re out of water to bring!” meant running back into the hotel over and over again. All told, we only left 30 minutes later than we intended – which for the first day, is not bad.

Last time I approached Zaatari with apprehension. This time, my eyes met the camp with a mixture of recognition and sadness. I was the veteran among most of our volunteers this time, and I appreciated the energy of pedestrian, parents, and patients alike. Zaatari has developed – which, of course, is a reflection of the problem. Its residents, like the 629,000 other refugees in Jordan, are simply stuck. There is no indication that they are returning to Syria, or moving along anywhere, anytime soon.

Immediately upon arrival at the AMR clinic, we went to our exam rooms – in reality, small trailers called “caravans” that have been cobbled together to form a structure. The waiting room was already full and within minutes I was hurtled back to the pace of seeing a patient every 3 minutes, with barely any charting. Amoxicillin and aceteminophen became my favorite medications – simply because we lack so many others.

We are able to count patients now, and in a little over 3 hours I saw 49 patients. I was greatly aided by the presence of a pediatric nurse practitioner, who saw over 30 on his own; combined, however, we barely came up to the number of a slow day for the clinic’s own pediatrician, who sees around 120 patients in a day.

Unlike last year, I pushed through nonstop with a more focused mind. The screaming parent trying to force his way in to the clinic barely registered with me; the rapid pace does not make me anxious anymore. Perhaps this is good. I hope that the patients believe so.

We left Zaatari a little early; we are back at the hotel and tonight we are taking our volunteers out for a well-earned first night’s dinner. Tomorrow morning, most of us rotate; I will report to Irbid, where the refugee community is larger, and has had no access to health care for over a year.

Thank you all for your support.