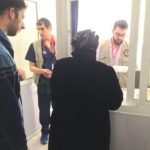 I look down at a bawling 21 month old, his mouth covered with sugary glaze; his attempts to fight me off from examining him are futile, given he won’t let go of the lollipop he has fisted tightly in each hand.

Today (technically, yesterday, given the time I’m writing this) was spent in Irbid, one of the largest cities of Jordan and about a 90 minute drive north. A college town, it has a highly educated population as well as a medical school. As such, it became a magnet for Syrians with some means and savings who came once the revolution began. They were able to maintain a certain level of existence for a time; however, years of conflict have meant that any comforts have been stripped away. The inability to work legally for five years has extinguished nearly every savings account. Today, one social activist told me that 90,000 Syrian children in Jordan are out of school as they cannot legally attend one.

In some ways, these children are also more medically desperate than those in the camp; without any subsidized access to health care, even vaccination is not reliably performed. However, the mere presence in a city means that the occasional treat – such as lollipops – may be enjoyed.

After discussing nutrition with the lollipop-slathered child’s mother, I saw another 40 patients or so without stop. Again, most of these cases were common; otitis media, gastroenteritis, and rashes. After a run of these cases, a mother brought her 5 year old daughter in. Her story began as thus:

“When she was six months old, I was in a horrible accident. I had to have multiple surgeries, and I kept breast feeding her the whole time.”

Puzzled, and wondering if fatigue was making my Arabic even more second generation that is usually is, I asked her to repeat the sentence; after which she added:

“Since then, many things have gone wrong. Her teeth are all black.”

Tickling her to create a smile, I verified the color of her upper incisors; they, however, appeared to be with caries.

After another minute of apparently confusing history, the girl’s mother then concluded, “And now, she still won’t speak. Another doctor told me she needs vitamins, but that didn’t help”

Suddenly, things came into focus. I could get the girl to follow simple commands – but I couldn’t stop her from walking away when she wanted to. Her social interaction appeared occasional, but fleeting.

Gently but quickly given the line outside my door, I brought up the possibility of “marad at-tawahhud” – autism. Asking for the help of a Jordanian family practitioner working in the clinic with us, I explained that what her daughter may have is a structural problem with the neurons of the brain, one that diet and vitamins won’t fix. I directed that she should try to pursue an evaluation for development and occupational and speech therapies. What followed was the question I dreaded.

Because she is a refugee, I don’t have an answer for her.