IN 2021, SAMS PROVIDED MORE THAN 2.3 MILLION MEDICAL SERVICES TO THOSE IN NEED

Crisis in Syria: 10 Years On

The greatest humanitarian crisis of our time

Humanitarian Crisis in Northwest Syria Amid Displacement and COVID-19

The Syrian American Medical Society (SAMS) Foundation is a global medical relief organization that is working on the front lines of crisis relief in Syria, in neighboring countries, and beyond to save lives and alleviate suffering. SAMS proudly provides medical care and treatment to every patient in need.

Ten-year-old Maysa was transferred to the SAMS-supported Idlib Central Hospital, suffering from a painful cyst in her chest. After undergoing the necessary tests and X-rays, Maysa was admitted to the OR for surgery.

Mayssa began having health problems a year ago. She was suffering from... READ MORE

70-year-old Nadim was admitted to Al-Amal Hospital in Darat Azza, one of three SAMS hospitals designated for managing and treating severe cases of COVID-19. His condition quickly deteriorated given his underlying condition and advanced age.

Askaria is a Syrian refugee living in the Beka’a Valley, Lebanon. She volunteered with SAMS as a peer educator, seekING to promote awareness about COVID-19 in refugee settlements across Lebanon. The project was funded by the Center for Disaster Philanthropy. Even as a mother of five... READ MORE

Our psychosocial support (PSS) team in northwest Syria conducts frequent visits to IDP camps. One of our beneficiaries was 9-year-old Ghufran and her brother Mohamed who reside in an informal settlement. They were forced to flee their home in the southern countryside of Aleppo due to... READ MORE

Sabah is a Syrian refugee from Dara’a who fled to Jordan in 2013 after her house was completely destroyed in an airstrike. “I was suffering from blurry vision and white mucus in my eye. I didn’t know what it was. So, when I learned about the SAMS Mission through Facebook, my son... READ MORE

Ten hours after giving birth to their son Ahmed at SAMS-supported Maternity & Children's Hospital in Al-Atareb, the family rushed back to the facility because they noticed the yellowing of their baby's skin and eyes. Upon their arrival to the hospital, our medical staff immediately conducted... READ MORE

During our medical mission to Jordan in April 2018, New Jersey-based doctors Fares and Salem Samra met three-month-old Iyas. Iyas, who was born with a cleft lip, underwent surgery to correct this congenital condition. After a successful hour long procedure, we reunited the tiny patient with... READ MORE

Dia, 6, was one of our young patients in East Ghouta. Dia was injured in an airstrike attack on his home in the besieged area. Sadly, his mother was killed in the attack, and his sister was badly wounded. Dia suffered a spinal cord injury that paralyzed his lower limbs. He continues to... READ MORE

A pregnant patient arrived at a SAMS-supported medical center in Daraa, experiencing early labor. SAMS medical workers responded immediately, performing tests that revealed that she was expecting triplets. She received an emergency c-section, and we're happy to report that she now has three... READ MORE

Five-month-old Rukaya came to a SAMS-supported hospital in Idlib in critical condition. After performing several tests, doctors diagnosed her with pneumonia. They acted immediately, opening up her airways and providing oxygen, keeping her under close observation. Rukaya was admitted to the... READ MORE For Immediate Release February 6, 2023  The Syrian American Medical Society (SAMS) is on the ground in Syria responding to... 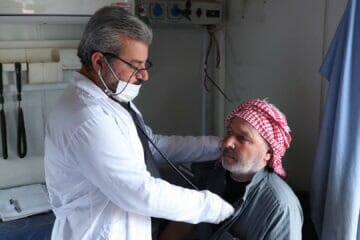 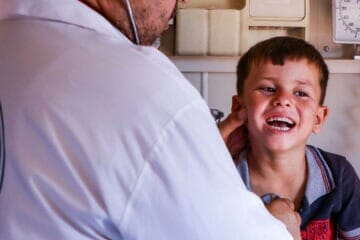 On Friday, December 9th, the UN Security Council passed Resolution 2664, implementing a safeguard for humanitarian relief across all UN...

Read More
View All The News

95 cents of every dollar donated went directly into our relief programs in 2020.