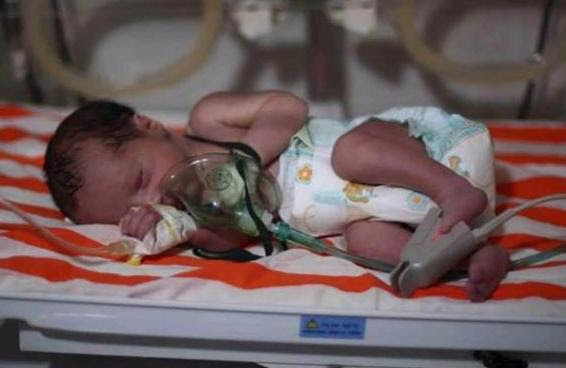 Washington, DC – In Douma, East Ghouta, a 4 week premature baby was delivered from his dead mother after aerial attacks hit residential areas. The baby boy was delivered by cesarean section after his mother was killed in a missile attack. Dr. Saif Aldeen Khobieh, who had been working in Ukraine before the crisis and has worked as a general surgeon in East Ghouta for the past four years, delivered the baby, saying “His mother died after a missile strike in Douma. The boy was kicking in her abdomen, asking to see life. It took 5 minutes in the ER. It seems that God was helping this life survive a horrible tragedy.” 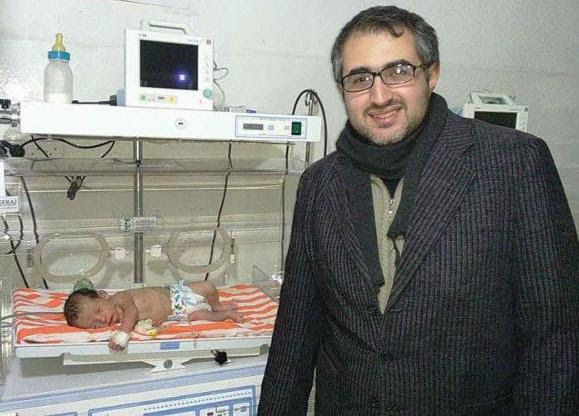 The recent upscale in aerial attacks in East Ghouta have killed more than 78 people and injured over 200 in the last five days. In addition to the attack on Douma, four other major aerial attacks by Syrian government and Russian forces occurred in East Ghouta between December 3 and 6. The major aerial massacres took place in Erbeen, Kafr Batna, Jesreen, Douma, and Zamalka. Cluster bombs, guided missiles, shelling, and more were used on residential areas, markets, and medical points. The majority of those injured were seen by SAMS-supported facilities in the area. “I do not know how I can express my feelings. Every life we save might be a hero who will build Syria in the future. I am very proud of the staff in East Ghouta. It was just a field hospital that saved the infant,” said Dr. Majed Abou Ali, SAMS Protection Officer and Public Relations Director for the United Medical Office of East Ghouta.
Over the last two months, there has been an increase in the scope and scale of violence in Syria. There have been more frequent attacks on civilian infrastructure and medical facilities, leading to new waves of mass displacement and casualties. October 2015 was the month with the greatest number of attacks on medical facilities since the beginning of the conflict, with 16 attacks. In besieged areas like East Ghouta, which has been under siege for over three years, there has been no access to humanitarian or medical assistance from the international community. SAMS calls for the immediate prioritization of civilian protection and humanitarian safeguards by all parties to the conflict, and an urgent halting of aerial attacks on civilian areas and infrastructure.
For media requests, please contact SAMS’s Program Associate Caroline Philhower at [email protected].