Madaya: Portrait of a Syrian Town Under Siege

In late spring 2016, 12-year-old Ola died in Syria. Her death was not from barrel bombs, missiles, or mortar fire, but from starvation. She lived in Madaya, a small town controlled by opposition forces an hour’s drive from Damascus that the Syrian government has besieged – trapping residents inside without access to supplies, food, or services outside the town – since July 2015, in violation of international humanitarian law. Read the Full Report

During the government’s siege, Madaya’s 40,000 residents – roughly four times the town’s original population – have been surrounded by landmines, checkpoints, and snipers, forced to survive on the meager supplies and services available inside the town’s narrow boundaries. With inadequate food stores and medical care, they have suffered from starvation and malnutrition, and succumbed to disease, traumatic injury, and other life-threatening conditions. 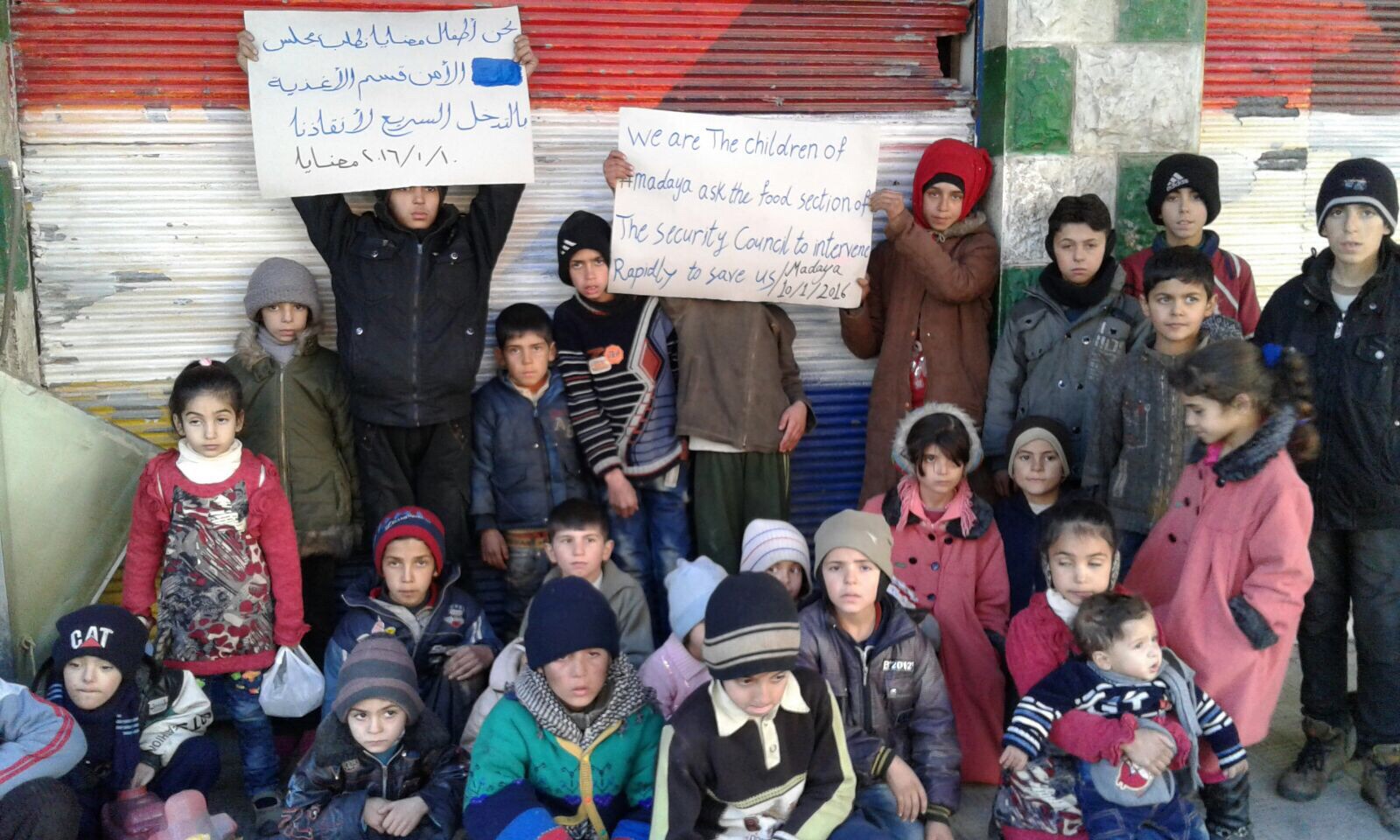 In December 2015, after nearly six months of siege and only one humanitarian aid delivery that included expired food, reports from Madaya appeared in international news outlets, including graphic images of starving children and adults. This prompted a large-scale effort to deliver humanitarian aid and alleviate the impact of the siege in Madaya.

None of these efforts saved Ola. Of the four humanitarian aid deliveries to Madaya between January and April 2016, none included adequate food and medical supplies to alleviate advanced malnutrition and starvation for all of the town’s residents. This is in large part because Syrian government officials only permitted the delivery of limited quantities and types of food and medicine and stripped out essential aid from convoys, including kits to treat severe acute childhood malnutrition. Government officials also did not respond to requests to evacuate Ola for urgent medical care, despite promises in a September 2015 agreement between warring parties to allow such evacuations.

Ola died on May 26, 2016, joining 85 other people who had perished from siege-related causes since the siege on Madaya began – 65 from malnutrition and starvation, 14 from landmines, six from snipers, and one from a chronic health condition. Almost all 86 could have been saved if they had had access to food, medication, medical equipment, and medical treatment by specialized health workers. But there is grossly insufficient food, medicine, and medical equipment in Madaya and two dentistry students and a veterinarian are left to care for the town’s 40,000 residents. The lives of Madaya’s remaining residents hang in the balance, with hundreds suffering the untreated effects of malnutrition, chronic health conditions, infectious diseases, and traumatic injuries.

Ola’s tragic story may be extreme, but it is not unique. Syrian government forces, and, to a lesser extent, non-state armed groups, have besieged cities and towns across the country since the start of the conflict in March 2011. They employ sieges to punish entire populations for their presumed support for a party to the conflict, and, in some cases, to increase their leverage over access of supplies to other besieged areas. As of May 2016, human rights organizations have
documented that more than one million Syrians live under siege, the vast majority by Syrian government forces, although UN OCHA puts the number of total besieged people much lower at 517,700. The Syrian government and other besieging parties have denied deliveries of food, medicine, and other things indispensable to survival, subjecting entire populations to slow deaths by starvation and lack of health care. The UN Security Council has repeatedly demanded an end to all sieges in Syria, but these demands have been ignored.

Syrian government officials continue to impose bureaucratic processes for aid deliveries and medical evacuations, giving priority to political considerations rather than to ending deadly and unlawful sieges. UN humanitarian aid agencies have been forced to request individual authorization by the Syrian government for each aid convoy to each besieged location. While government authorities have occasionally approved these requests, more often they have restricted the quantity and type of food and medical aid allowed in, denied access to convoys outright, or prevented approved convoys from entering at local checkpoints.

Deaths will continue as long as sieges are in place. As of June 2016, no besieged town in Syria had received more UN humanitarian aid deliveries over the prior year than Madaya, which received monthly convoys between January and April of 2016. These deliveries, and sporadic humanitarian evacuations during the same time, have undoubtedly saved lives. However, these halfmeasures, lauded by the media and UN officials as progress toward ending the siege, have been far from sufficient to alleviate the immense suffering in Madaya.

Dr. Muhammad Darwish, who was a dentistry student when the conflict broke out and now is one of Madaya’s few remaining health care providers, explains: “What we need in Madaya, and in all besieged areas in Syria, is to lift the siege once and for all. No more beating around the bush and allowing a few convoys in here and there that don’t include medication and with aid that doesn’t even meet the needs of a quarter of the population.”

Siege warfare and the willful denial of humanitarian aid – especially aid indispensable for survival – are illegal under both the Geneva Conventions and customary international law. They constitute war crimes. Such acts are also crimes of collective punishment, itself a separate violation of international humanitarian law.

Physicians for Human Rights (PHR) and the Syrian American Medical Society (SAMS) demand that all warring parties in Syria immediately end their deliberate starvation of civilians and blocking of humanitarian aid. Members of the UN Security Council and the International Syria Support Group must demand and guarantee freedom of movement and unimpeded and constant access to all needed humanitarian aid and commercial access for Syria’s besieged population, from food to medical supplies to life-saving services. World leaders must support humanitarian agencies in pursuing every means possible – including airdrops – to deliver life-saving aid and services to everyone in need. Each additional day under siege causes untold suffering to more than one million Syrians and brings them one day closer to death.

Read Madaya: Portrait of a Syrian Town Under Siege